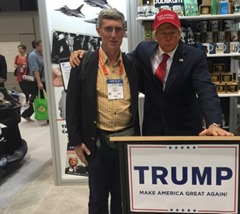 You could find anything in the vast exhibit hall at McCormick Place during BookExpo America 2016, including a Donald Trump impersonator hyping a new book that he said was “ridiculous, a disaster.”

The book is Trump’s America: The Complete Loser’s Guide, by Scott Dikkers, founding editor of The Onion. My interview with NOT Real Donald Trump closes out this week’s all-BEA episode of The Kindle Chronicles podcast.

My other interview guests include Scott Turow, past president of the Authors Guild; Jon Fine, Amazon’s former director of author and publishing relations; and Morgan Entrekin, president and publisher of Grove Atlantic.

The last time I attended BEA was three years ago in New York City, when the book business seemed more polarized and riven than it appeared to me in Chicago two weeks ago. Exhibit A was a panel titled “Authorship in the Digital Age,” moderated by Fine with Konrath, Turow, and Freethy as panelists.

Fine interjected, “Aw come on, guys,” when Konrath began his introductory remarks by saying he mainly agreed with what Turow had just said. I have seen those two go tooth and nail on other stages over the past several years. “Joe and I go back and forth on Amazon,” Turow told me in an interview after the panel. “He sees them as all good, and I see them as all bad. I know the truth is somewhere in the middle.”

Turow, who sings the praises of the Big Five Publishers based on his phenomenal success as a Hachette author, now has personal experience with the benefits of self-publishing on Kindle and other platforms.

His MFA-toting daughter, Eve Turow, could not find a publisher for her manuscript about the food obsession of Millennials, so last year she self-published it with great success, her proud father said. The book is A Taste of Generation Yum, rated 4.4 out of 5 stars at the Kindle Store. Turow said he told one of the publishers who had turned the book down that Eve has made more money self-publishing it than if the publisher had accepted it.

So there are lots of viable paths for authors these days, and seemingly less need for the various camps to insist that their way is best. That made for an enlightening vibe at BEA 2016, in my experience.

As for The Onion’s Trump book, Scott Dikkers told me it is designed to entertain supporters and opponents of the GOP presidential nominee in waiting. The impersonator they hired had a great tan and an eerily convincing presentation.

My guest on the podcast next week will be Chang Kim, CEO of Tapastic, creator of a platform for bite-sized comics and text via new apps on iOS and Android.