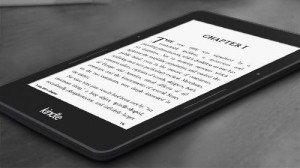 A Kindle update for the iPad and iPhone, version 4.10, is rolling out with an “About the Book” feature, according to Nate.

The really, really fun news of the day is a rumor—passed on by Good E-Reader—about a Voyage 2 appearing in November with a higher-speed processor. Bottom line, reportedly? No more page flickers.  The Voyage 2 is to use a Freescale dual core chip. Photo is of the existing Voyage.

Is the rumor true? I can’t say. But I find it very plausible since E Ink development hasn’t been as rapid as many had hoped, and if Amazon lacks other good display alternatives for the Voyage right now, why not focus on chip-related matters? Contacted via e-mail about his source or sources, Good E-Reader Editor in Chief Michael Kozlowski told me: “Can’t divulge my sources, but there are two. Both from the chipset side.”

Assuming the Voyage 2 is real and is as capable a Good E-Reader says, that’s wonderful news. E-readers will be a little closer to being tablets, and what starts at the high end will trickle down even to budget models.

For now, Amazon, how about at least giving us Bluetooth in your E Ink devices?

“About This Book” enables you to “Learn more about the book before you start reading, including the typical time it takes to read it, its place in a series, and info about the author.”

“Introduction to Study Features” lets you “Learn more about the study features in your print replica textbooks, including Flashcards, X-Ray for Textbooks and Notebook.” I have mixed sentiments about e-textbooks, given all the gouges out there and other issues, but I am all for features to help readers get a better feel for the books. We need to get away from the old paper paradigms. Amazon is helping us do it.

(Updated with information about Good E-Reader’s sources, among other tweaks.)