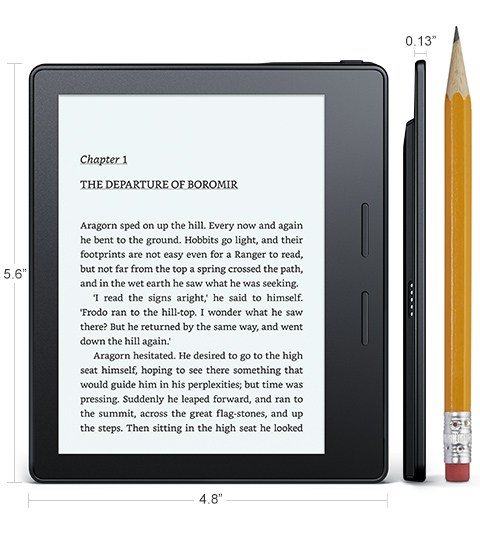 KBoards members have been sharing a fascinating conversation on the Amazon Kindle Oasis’s battery life. After all, Amazon claims that: “a single charge with cover lasts up to eight weeks, based on a half hour of reading per day.” So it’s no wonder that avid e-readers have been both keen to buy the device on the basis of that claim, and keen to test how it translates into real-world usage.

Amazon does caution that its quoted battery figures are “with wireless off and the light setting at 10,” and also that “battery life will vary based on light and wireless usage.” Actual reported battery life, inevitably, varies. KBoards administrator Betsy the Quilter notes that, after 48 hours in which “I’ve been reading a fair bit,” her Kindle Oasis is “currently at 91 percent for the Kindle (charging from cover) and 73 percent in the cover.” Reader northofdivision states that “so far the battery overall from full time charge is much better than any of the Kindles I’ve used before (due to the two batteries) with the caveat I haven’t plugged this sucker in yet. Four days of reading a lot and the Kindle sans cover at 94 percent. Would say that’s pretty great.”

As one instance of a heavy-usage outcome, KBoards user Atunah adds, “the end is near on my cover battery. It was at 16 percent this morning after a night resting and the kindle at 91 precent when I took it out. So will have to be charged today. Which makes it 4 days. I first charged it full 4 days ago at 2pm. Again, light at 10 most of the time, wifi always on… I read every day several hours.” And, on recharge speed, “It took me about 2 hours to charge full with cover at 15 percent and kindle at 25 percent. Not too long at all.”

Indeed, I can’t find a single report so far at least where anyone is actually dissatisfied with the battery life on the Kindle Oasis. Amazon’s claimed battery life? Well, it’s not quite as promised, but then no one seems too disgruntled. As Betsy the Quilter adds, “30 minutes a day has become the standard for eInk readers to show the length of battery life; I’m pretty sure Nook uses the same standard.” ShinyTop notes: “Got about 20 hours on first charge.  That is 40 days by Amazon’s 30 min/day rating.  Not bad considering I read at 16-18 brightness.”

As Chris Meadows has remarked of the Kindle Oasis, “The internal battery is a 245 milli-amp hour battery, which is hardly any juice at all.” He reckoned the Oasis cover battery to be likely a “1420 mAh battery like the Paperwhite’s.” KBoards users come in with guesstimations of the cover batter capacity in about the same range. In any event, though the KBoards represent a pretty select sample of committed Kindle readers, almost all of them seem happy with their experience on the Kindle Oasis. So get out there and read, people, till the cows come home …