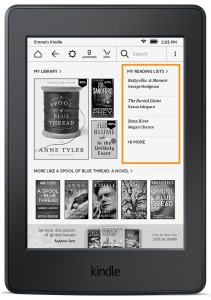 “Kindle hardware update adds Open Dyslexic font and more features, but where’s the all-text bold?” I asked. But wait. Amazon actually has gone backwards. The new Kindle upgrade, 5.7.2 makes the text even less readable for some.

Steve H. complains: “One of the main reasons I did use Helvetica was that it was somewhat bolder (not enough but better than other Kindle fonts). I want bold font options…If you look up words on your Kindle check Vocabulary Builder to see how rich and contrasting bold text could look. The difference is amazing.”

“My first thought was to wonder why my Voyage screen isn’t as sharp and clear as those pics posted at Amazon,” says MrsMac.

Over at MobileRead, Axanar writes: “I can barely read on my PW2 because of the fine lines and thus contrast reduction. Though my settings has the smallest font, smallest border and smallest linespacing applied (to get more content on a page). With 5.6.5 and less I was able to read clearly and easily that way. With 5.7.2 it turned out to be impossible. Even increasing the font size by 1+ or 2+ didn’t change much. Even worse when you use the Beta-Browser or Kindle Shop. Try reading the thin lines of fonts. Close to impossible for me now.”

Thanks to Amazon’s proprietary DRM and the wonders of the anti-circumvention provision of the DMCA, the typical victim of the Thin Helvetica Syndrome here in the U.S. has no recourse.

Look, I’m a big fan of Amazon’s hardware despite flaws like the one above, and I suspect that others complaining about the thin Helvetica Syndrome feel the same. Please, Jeff. Do something. As people age, their eyes may develop more contrast issues, one reason why boldface or adjustable font weights would help. The cost of correcting this shortcoming in the Kindle E Ink machines would be next to nothing.

What will it take to turn Amazon around? I’ve been writing about Kindle-related contrast issues for years. Granted, E Ink inherently has contrast problems for people like me. But boldface can at least boost the perceived contrast. Why doesn’t Amazon care? Isn’t Jeff supposed to be customercentric? Especially when dedicated E Reader sales have stopped growing, it would make business sense to address the accessibility issues.

I’m juggling around a bunch of things right now, but as a next step, I think I’ll contact the AARP and see if it would care to speak out on this age-related issue.

Reminder: The orange lines in the Amazon image in this post don’t mean the company has added color to E Ink Kindles. Amazon just used the orange to show up a new feature.