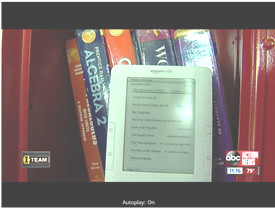 Here’s a story to make any K-12 tech booster weep, if it’s true. A 1,750-student high school in Florida is said to have owned 5,217 Kindles and Fires over the years. But the kids supposedly checked out just 44 of the devices in 2014.

“In 2010,” reports TV station WFTS in Tampa Bay, “Clearwater High School became the first school in the world to buy a new Kindle reading device for each student, believing at the time that Kindles represented the future of education and would replace regular textbooks.

“But five years later, many of these devices still aren’t paid for, even though most are doing little more than gathering dust.

“’What we’ve learned is that students and teachers are telling us they love to read on Kindles,’ Dave Limp, Amazon’s vice president for Kindles says in the video.

“That video was produced in 2012, when Amazon introduced its Whisper Cloud [Whispercast?], a new technology designed to allow schools to more easily support a Kindle network, which offered students limited web access, so they could check assignments, grades and other information using their assigned Kindles.”

I Googled over to a related page on the Amazon site, and sure enough the company still had online material about Clearwater, even if at that point the school owned a mere 3,628 devices. 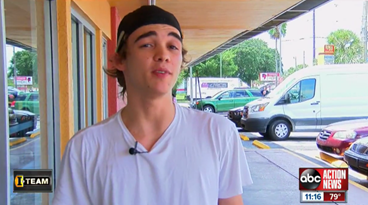 But why so many e-readers per student? Well, it seems as if the Kindles had a high breakage rate.

Supposedly some Clearwater students were even using them as Frisbees. “Kids would…test their durability by throwing them across the school,” the student in the photo to the right says on camera.

Hmm. I wonder about the insurance and storage situations. And why keep around broken Kindles, if that happened? How much of the ownership took place at one time?

At any rate, Clearwater went on to start up a bring-your-own-device program including laptops and cell phones, presumably not used as Frisbees.

Watch the video and tell us if you think the WFTS story is true, or is at least a mixture of facts and almost-facts. If the report is mainly factual, then just what lessons do we have here from the hundreds of thousand dollars spent?

Perhaps we can start with the hardware. E Ink tech at this point is ill-suited for most textbooks. Students can’t move around from place to place within a book nearly as quickly as they can with a tablet. What’s more the six-inch screens would hardly be optimal for viewing detailed illustrations. Simply put, E Ink Kindles are better suited for recreational reading than for textbook use despite major improvements in navigational capabilities. As for the Fires, they probably were seven inch models, hardly the best for textbook use.

Even more importantly, school administrators and planners must worry sufficiently not just about the gizmos and wires and WiFi but also about little trifles like content and proper preparation of teachers and students. As you’ll see from the WFTS video and article, the high school offered some books, but not enough. Especially, it might have done better in the recreational reading department.

Perhaps the Clearwater program started out strong, but if the TV report is accurate, the high school never followed through. Did it show the students movies based on the classics in the Kindles? What about mixing the classics with high-interest books, in line with the recommendations in Readicide, by Kelly Gallagher, a veteran teacher, who emphasizes the need to explain the oldies and work hard to get the students excited about them ? 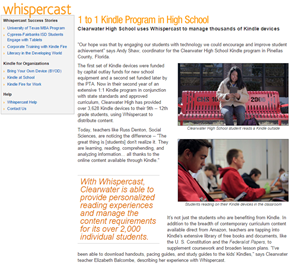 And is there a chance the school could start a cell phone book club, centered around the actual interests and needs not just of students but perhaps also of their parents?

Maybe another lesson is to beware of the corporatization of education. How much are we talking about actual education here, as opposed to Amazon marketing?

Interestingly, New York schools have just awarded a $30 million K-12 book-related contract to Amazon, and one hopes that the schools there won’t repeat the mistakes said to have happened in Florida. More encouraging news comes out of Africa, where World Reader’s Kindle efforts  in K-12 may be achieving better results. If nothing else, World Reader appears to have paid close attention to such basics as breakage (by way of protective cases) and availability of content (via partnerships with publishers such as Penguin Random House).

Related: Clearwater’s page about the Kindle program. Notice the reference to paving the way for a Bring Your Own Technology Program? Did the school really get its money’s worth in spending hundreds of thousands just to pave the way? Might a small Kindle pilot project have better served Clearwater? But marketing first, right? I’m also curious just why Clearwater spent so lavishly. No accusations of wrongdoing here. But this angle is certainly being investigated in L.A.’s K-12 iPad  debacle.