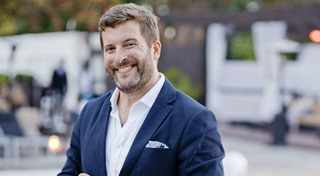 Publishing Perspectives has an interview with Michael Tamblyn, CEO of Kobo, which offers a few interesting tidbits. Even though parent company Rakuten took a $68 million write-down on Kobo’s balance-sheet value, Tamblyn is optimistic about his company’s position in the e-book business.

Tamblyn notes that the market share growth of e-books has leveled off, and they’re now “holding steady between 20 and 30 percent of the market,” and genre fiction is one of the areas that drives their growth.

He also notes that the growth of e-books has been driven by an older demographic—the opposite of the usual tech shift that happens because of young technology-users. Older people have more time and disposable income to spend on reading, and like being able to increase the font size when they need to. An editor’s note points out that 72% of Kobo’s customers are older than 45.

Tamblyn also discusses the research they did into how new users liked to use e-books, which prompted Kobo to set up a telephone tech support program called “Kobo Welcome” to help people get started with their new e-reader and choose something they wanted to read. Tamblyn said it takes about 48 hours for a new e-reader user to get comfortable with the device, and the best way to get them to do that is get them reading a book they actually like.

And he also suggests that standalone e-ink readers are far from dead. People who buy e-ink readers tend to be people who are serious about reading, and want to be able to read with fewer distractions.

Hardware is now a profitable business for us. Unlike some of the manufacturers who could never get the manufacturing or economics right, hardware made a profit [for Kobo] in 2015.

The kind of customer we get through a device is worth about 30 percent more than through a smartphone. Book libraries are bigger. These customers are more loyal. They tend to read faster. That’s because they are already a person who is predisposed towards doing more reading. We have a great business on iOS and Android, but we can see from the data that the experience is more fragmented. Reading times are shorter and it’s broken up by text messages or social media. It is a much less immersive experience than on an e-reader.

He also says that Kobo devices get higher ratings than the Kindle and have excellent word-of-mouth.

Tamblyn concludes by explaining that the write-down came because e-book adoption has slowed, and the company’s original valuation was based on the assumption that e-books would have a 40- to 50-percent market share by now, rather than the 25- to 30-percent share. He also says that the reason for Kobo’s longevity is that it focuses on the international market, where e-books are still growing. While English-language e-book growth has plateaued, France, Italy, and the Netherlands are still seeing “fantastic growth.”

I certainly do hope Kobo continues to thrive, even if it’s thriving in a smaller way than Amazon. And it’s interesting that e-readers continue to do well among those who read a lot—especially with regard to the older demographic. I would have thought many more people of that age would prefer traditional paper books, like my Dad—and I expect some do. But for others, being able to turn anything into a “large print” edition, and being able to turn pages with a tap instead of a repetitive wrist motion has its appeal.