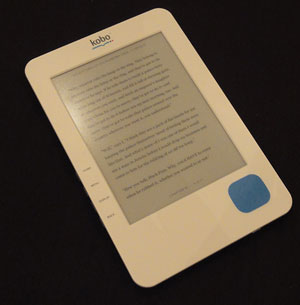 The Kobo reader has finally hit retail here in Canada. I am thrilled! I hot two local Indigo stores on launch weekend and there were large displays flanked by staff who clearly had been well-trained and knew their stuff.

And there seemed to be no shortage of interested customers! I think the price point is really hitting the sweet spot with people who were either interested by scared away by the high price of the Kindle, or are new to the ebook market and willing to try it out.

I also think that psychologically, having it in a BOOK store as opposed to an electronics store is a big deal. Two years ago, the only place to buy an ebook reader in Canada at the retail level was the Sony store, and even in large cities there might be only one or two of those. The Sony and the Aluratek Libre finally got a wider retail presence within the last few months, at a major electronics chain. But shoppers there look for gadgets while shoppers at Indigo look for books! Years from now, I think the launch of the Kobo reader will be seen as a tipping point for the ebook market in Canada.

There is work to be done. The Kobo software, which was not ready in the pre-launch unit I tested, is terrible. I was expecting an iTunes-esque drag and drop interface like the Sony and Adobe software had. I thought the device would pop up in a side bar and I could drag files onto it. Nope. I spent ten minutes trying to click on stuff before I gave up and hit the forums at Mobile Read—where someone had figured out that you needed to log into the website to change what goes onto the reader via the software. This is completely unintuitive. I am trying to use the desktop app and I need to log into the website? Why not just have each book be a drag-able icon inside the app?

The issue I had in the pre-launch unit with certain books not allowing a font change has also not yet been fixed. They had plenty of notice about this, so I am disappointed it shipped with such a serious glitch as yet unfixed. And sure enough, a good portion of the initial posts in the new Kobo forum at Mobile Read were from bewildered users who couldn’t figure out what was wrong with their books.

A Kobo rep has already been replying to posts at Mobile Read, so I know they are reading user comments and working on any minor issues. Props for that. And congrats to the Kobo team—they have grand aspirations, and I think if anyone can meet them, it’s those guys. Getting a budget-priced ebook reader into the retail chain as a book item, not a tech item, is a huge accomplishment.