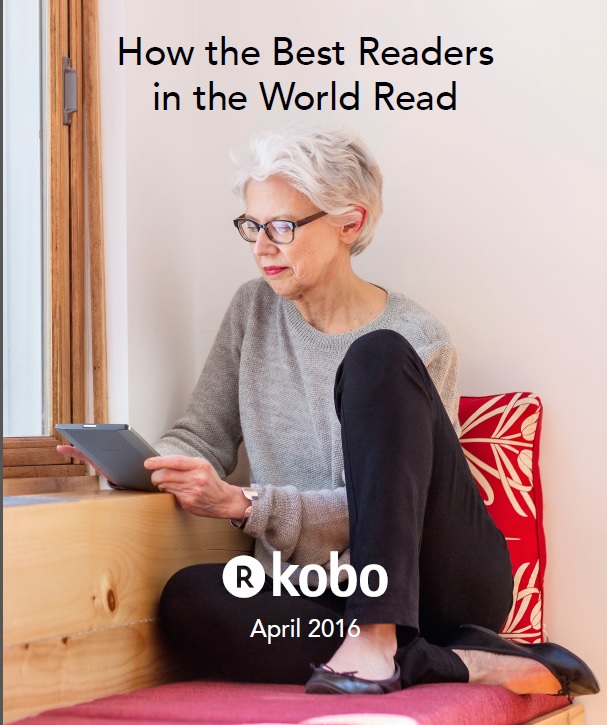 A fascinating Kobo white paper, “How the Best Readers in the World Read,” released to coincide with the London Book Fair, presents some very interesting findings on the current ebook ecosystem – beyond Amazon, that is. And these should apply to Kindle users too – while shedding light on e-reading habits across the board.

The Rakuten Kobo report focuses on what it terms “the world’s most active readers,” in other words, “our customers who spend the most time reading – at least an average of 30 minutes every day.” Its conclusions are based on “global reading and purchasing aggregate statistics based on customer use of devices, apps, and web store analytics,” as well as “global surveys of readers conducted by UK-based Verve,” with surveys that “included Kobo and competitor customers; the margin of error is <1 percent with a confidence level of 95 percent.”

The results challenge quite a few assumptions. For instance, “uptake in digital reading is driven by middle-aged people – approximately 77 percent of the most active readers are age 45 and older, with the largest single group (30 percent) being age 55 to 64.” Also, regular ebook reading and buying apparently fuels appetite for print as well. “Prolific readers buy an average of 60 eBooks a year and 16 print books a year,” notes Kobo.

The report also found that, “of the most prolific readers, a staggering 75% are female,” and “40 percent of prolific readers read at least 20 hours a week, or three hours a day.” Many of these findings echo the points articulated by Kobo CEO Michael Tamblyn earlier.

Of course, there will be some sample bias built in to the Kobo survey. For one thing, its emphasis on Kobo e-readers will likely skew its evaluation of reading habits towards people who buy such devices, rather than reading on their smartphones and tablets. And that group might also unselect itself by simply not using such devices as often, therefore missing the “prolific readers” bracket.

All the same, Kobo describes its conclusions as “good news for publishers and bookstores alike.” These emphasize that, “regardless of age, the world’s best readers are reading across both print and digital formats, and are using digital to fit reading into parts of their day where it may not have been convenient or comfortable to read before, including the morning commute or in the midst of other tasks.”

The white paper is also especially interesting for being outside the Amazon orbit. Fascinating reading in itself for any ebook fan.