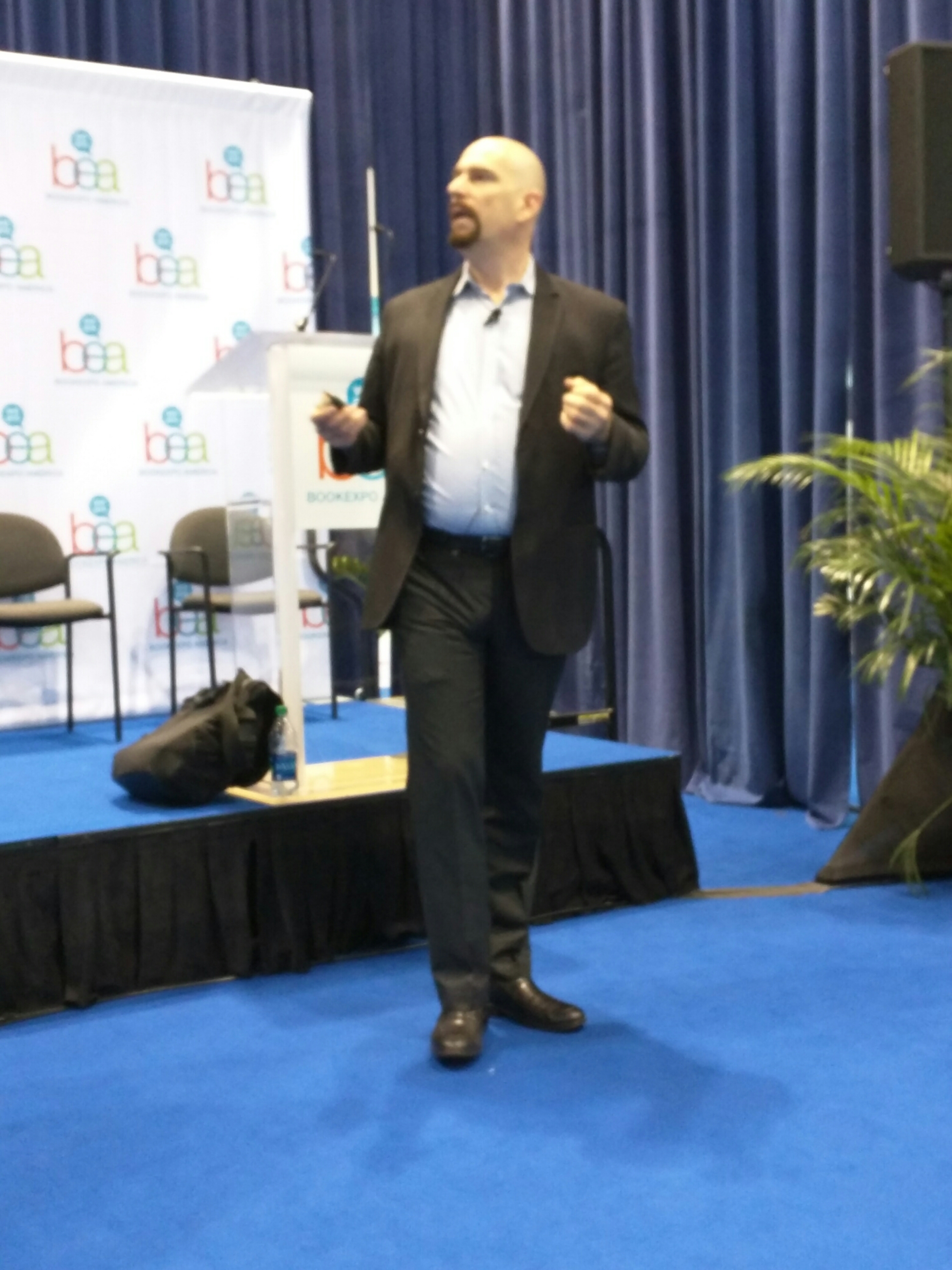 At BookExpo America today, I took the chance to attend a panel given by Mark Lefebvre, Director of Kobo Writing Life, on common digital publishing pitfalls. Lefebvre addressed a number of common mistakes digital publishers make, and how Kobo could help avoid them.

The first such mistake had to do with cover design. Given that e-book cover art is typically viewed in much smaller thumbnail form, fine print isn’t going to work well. he showed examples of covers that had been optimized for mobile, with the author’s name in big letters at the top and the title slightly smaller below. This makes them clearly visible even when the image is thumbnailed. 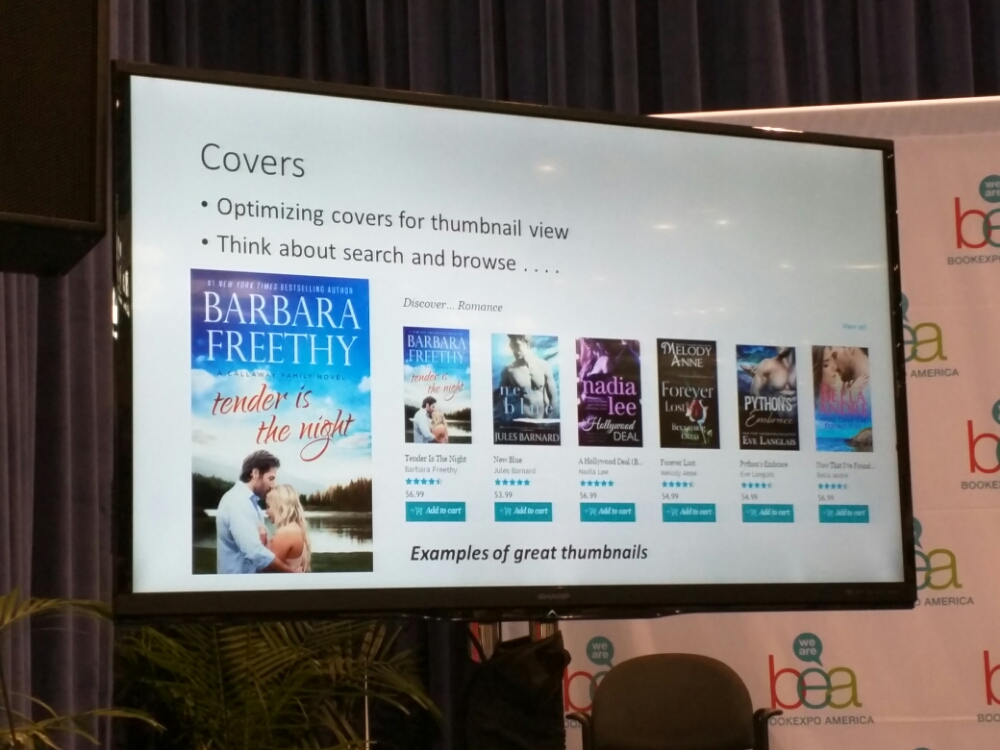 The second pitfall had to do with pricing. Lefebvre explained that many publishers price their e-books too high, in order to try to protect the windowing of their print prices. Hence, their e-books end up at the same price as or higher than the print version. This doesn’t play well with consumers, who tend to feel that much of the value of the book resides in the dead tree matter, though in actuality much more of it is in the content itself.

On the other hand, many independent publishers make the opposite mistake, and often undervalue their work—pricing it at 99 cents or otherwise too low. This tends to turn off many Kobo customers who’ve gotten burned by bargain-basement books that haven’t been very good—though pricing down to 99 cents on daily deals can be an exception.

One interesting point Lefebvre made regarding price is that, since Kobo is global, it sells in Canada, Australia, New Zealand, the UK, and elsewhere, in addition to the US. And customers in some of those regions—such as Australia and New Zealand—are used to paying more for e-books, so publishers can afford to price their e-books higher there.

This led into the third pitfall Lefebvre mentioned—a failure to think globally. When authors focus only on the US market, they could miss out on benefits from optimizing their price strategy to take global currencies into account, or making changes when currency fluctuations occur.

Lebebvre demonstrated an interesting feature of Kobo’s retail system, which has to do with a built-in currency converter that optimizes prices in the new currency rather than doing a direct conversion. For example, converting a US $5.99 price to Canadian dollars comes out to $7.70, which doesn’t look like a natural price. However, Kobo’s system will automatically round that up to $7.99 Canadian, which looks more like the sort of price we’ve been trained to expect to see on a web store. (UK pounds and Euros round to the nearest .49 or .99 price, given those currencies tend to have higher conversion values.)

The fourth pitfall was about the failure to think long-term. E-books aren’t just about the first 90 days. Once an e-book is available in the store, it’s not going to be rotated out to make room for newer books on a shelf, or shipped back to the publisher for a refund. It will stay in the store for as long as the publisher has the right to sell it. Publishers can have significant backlist opportunities if they only take advantage of them.

And finally, it is important for publishers to leave themselves open to making changes as necessary—adjusting metadata, experimenting with different price strategies, and optimizing for other circumstances. “Price is a verb, not a noun,” Lefebvre said, and recommended examining what other best-selling books in your genre are doing and adjusting your own strategies to be more in line with those of other successful titles.

Lefebvre also recommended using a free “funnel book” if you have other books available to sell—make the first book in a series, or one of your better stand-alone books free, as long as you have other books that customers can buy after reading the first one. He also provided some statistics about the effectiveness of such giveaways.

Say that a free e-book is downloaded 12,000 times. Of that 12,000, only 2,000 will actually open the book, and only 500 of those will actually finish it within six weeks. Those who finish it tend to have a 45 to 55% conversion rate when it comes to buying more books—which amounts to about 1.4% of the total free books given away. But if you have other books to sell, it can work.

One of the audience members asked a question about mining Kobo’s database to get an idea of what’s selling where. Lefebvre replied that Kobo had bestseller lists across 360 categories ranked by sales, and that romance and erotica titles had been found to sell best. There had been a huge growth over the last 6 to 9 months in crime and thrillers, which amounted to the second-most popular category, followed by fantasy and young adult books.

Another interesting note to come out of the talk was that Kobo’s arranged a partnership with fellow Rakuten-owned company Overdrive, to allow self-published authors to opt their Kobo books into Overdrive’s library e-book service. It plans to turn that option on within a few months.