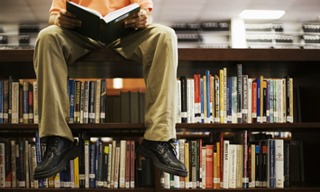 On Publishers Weekly, librarian Brian Kenney talks about publishers and public libraries. Pointing out that most industries would be crazy to discard the sort of taxpayer-funded marketing that the 17,000 public library buildings in the US provide, he notes that publisher relations with libraries have lately been lukewarm, and suggests three ways they should work on improving that relationship.

The first way is to discard the high-price-per-copy permanent license that Penguin Random House has adopted. Formerly, Penguin charged retail price but only provided licensing for a year. Now it sells perpetual use copies at $65 each. Kenney doesn’t mince words:

Let’s call this what it is: bullying behavior. PRH—whose titles often make up half of any given bestseller list—is giving public libraries an impossibly hard choice. If we buy PRH e-books in sufficient numbers to meet demand, we are left with less money to acquire books from other houses, which stymies our ability to create diverse collections. If we hold back, we create a dissatisfied public and risk becoming irrelevant to our readers.

It also disinclines librarians to feature PRH authors as part of discussion series, since they couldn’t be sure they could afford enough digital copies to go around.

I can certainly see where he’s coming from. It seems to me that this sort of license simply doesn’t fit the way most titles wane in popularity after their initial release. If a library buys fifty or even a dozen copies of a popular book when it comes out, that will cost a lot of money initially, and down the road they’ll be stuck with fifty or a dozen copies of that book that are no longer even needed. But if they only buy a couple of copies of the book at the outset, they’ll have a waiting list for it a mile long.

The second thing is that Kenney calls on librarians to stop the “book shaming.” As new technology predominates, many libraries are deemphasizing books. “At conference after conference, keynote speakers argue that public libraries should be community centers, agents of innovation, knowledge creators, and makerspaces.” (I ran into some of this myself at Gen Con Trade Day last year, in which one of the presentations was about how new technology could let libraries act as “sandboxes.”)

Kenney calls reading a “maker activity,” because readers “make” their own versions of the book they’re reading inside their head. Personally, I think that’s more than a slight stretch, but I can see his point. Deprecating the importance of books in a library could help to chill the relationship between libraries and publishers—since books are, after all, publishers’ entire raison d’être. And given that books are what the public think of when they think libraries, and there’s no sign books are going to die out any time soon, it seems like trying to sweep them under the rug is a touch premature.

Finally, Kenney calls on publishers to stop trying to push the idea of “classroom libraries” on teachers. While they seem aimed at helping to make up for schools that can’t afford a proper library or librarian of their own, their fundamental failing is that publishers can’t make good libraries by themselves—they need librarians who are professionally suited to building and maintaining them. “We can all agree that getting more books into the hands of more kids is a good thing. But let’s also agree that a stack of books in the corner of a classroom is not a library.”

I would agree with one of the commenters who points out that a sufficiently dedicated teacher could also make good decisions about what books would be best for their class, but apart from that, it seems like a reasonable criticism of publishers. Perhaps they could figure out some way to connect those teachers’ classes with their local public libraries, instead.

Regardless, I would agree Kenney is right that publishers and libraries ought to be seeking closer relations and friendlier ties. As much as publishers seem to want to support bookstores by charging higher e-book prices, they ought to be trying to support libraries as well—they’re another place where people can actually get their hands on physical copies of your new product, or see it displayed on the new-title shelves, or even borrow a digital copy without having to leave their homes. And, unlike bookstores, they don’t cost the consumers anything (except part of their taxes, of course).

How many other places out there are funded with taxpayer money and exist for the purpose of showing off the products of an entire industry for free?