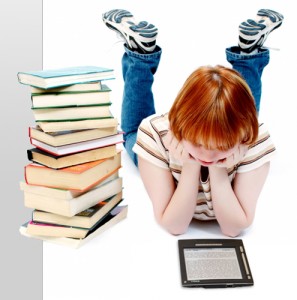 This particular time of year—the stretch between Christmas and, say, the first week or two of January—seems to always result in some sort of consumer-relevant trend story that is repeated over and over again in the media, ad nauseum, until most people simply begin thinking of the story as nothing less than pure fact.

And that’s certainly a forgivable offense: It’s easy enough to grow sick of reading (or hearing, or watching) a slight variation of the very same news blip so many times that thinking about it critically becomes a mental exercise.

It’s already clear that the 2012-13 holiday season is going to be no different. One of this year’s biggest trend stories comes to us from the nexus of technology and publishing, and if you’ve been scouring the sites over the past couple of days that cover those fields, you’ve probably seen it:

E-book reading is way up, statistically speaking. Print reading is down. (That’s the story.)

Haven’t noticed? Take a look at this article from ZDNet, titled “Good-bye books, hello e-books.” Or this one, from the Los Angeles Times, called “E-book reading jumps as print declines.” Which other news outlets, you may wonder, have recently reported similar variations of the same theme? Try The New York Times, Yahoo, The Washington Post, VentureBeat and GlobalPost, just for starters.

If you take the time to read those articles, you’ll find that they’re all referencing a December 27 study by the Pew Internet & American Life Project called “E-book Reading Jumps; Print Book Reading Declines.” There’s quite a lot of information to be parsed in the Pew study, and perhaps not surprisingly, some of the news outlets that have covered it seem to be at least somewhat confused by its interpretation. The aforementioned ZDNet story, for instance, suggests that “The number of people who are reading printed books is declining. But reading isn’t.”

And yet … here’s the thing: According to the Pew report, at least, that doesn’t entirely seem to be the case. Take a close look at the following quotes, which come from the “Findings” section of the report: 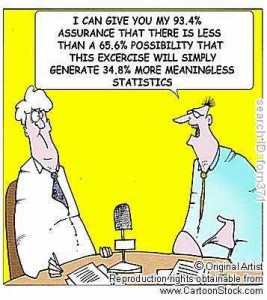 Now, I’m definitely no statistics whiz; I barely passed the Intro to Stats course course I took during my first year at university. So perhaps I’m the one who’s confused—it certainly wouldn’t be the first time. But if the overall number of book readers—which, for the purposes of this study, seems to include readers of both e-books and print books—has declined from 78 percent to 75 percent over the past year, wouldn’t that suggest that the act of reading has, in fact, declined slightly? (And by the way, I’m not telling—I’m asking. I really don’t know! Any mathematically-inclined readers willing to attempt an explanation would be much appreciated.)

Just to be clear, I should point out that in no way am I intending to take a pot shot at ZDNet, or for that matter, Steven J. Vaughan-Nichols, the (very accomplished and supremely talented) author of the article in question. Heck, from what I can tell, many of the publishing industry’s most-quoted thinkers and professionals seem to be lobbing lots of contradictory information back and forth regarding the Pew study .

Even The New York Times‘ blog post about the report, for instance, included a line of fairly confusing info: “Sales of dedicated e-book readers may have peaked last year,” writes tech reporter David Streitfeld, “but the percentage of Americans owning one rose to 19 percent from 10 percent.”

Does that sound right to you? Unless there’s some sort of free e-reader store no one told me about, it definitely doesn’t sound right to me. Then again, we’re not really given the full picture in the Times piece; Streitfeld tells us that the percentage of dedicated e-reader owning Americans rose nine percentage points in 2012 … but he doesn’t tell us which year or years that data is based upon. Did the nine-point rise happen in two years? Three? Five? Who knows? Not me. And not you, either, unless you’ve already dissected the entire Pew report.

Speaking of which, the full 15-page report can be downloaded in PDF form by clicking here, for those of you who are so inclined. (If you’d like to play along at home, you can download the actual survey questions, also in PDF form, here.) And please don’t get me wrong—it’s a very detailed and informative report. And for those of you in the business of selling content professionally, it probably also contains some degree of value. (And yet I also get the sense that you’d need an advanced calculus degree to understand the terrifying mathematics equations that appear in the “Weighting and Analysis” section on page 12. Just sayin’.)

So … what exactly is my point? Well, I’m not actually trying to suggest that all the e-reading and digital publishing studies our industry publishes are inherently flawed or misintentioned in some way. And yes, I’ll admit that the title of this post was written with at least the tip of my proverbial tongue hidden inside my cheek. I can also assure you that we are going to continue covering the majority of the significant industry reports that come our way here at TeleRead; that’s not going to change anytime soon.

In fact, it just so happens that this particular Pew report is relatively rich with the sort of easy-to-understand data that I was surprised not to have already known. For instance: According to the report, “In the book-reading population, those most likely to read e-books include those with college or graduate degrees, those who live in households earning more than $75,000, and those whose ages fall between 30 and 49.” And furthermore, what digital reading enthusiast could possibly resist feeling a tiny jolt of hope after reading the following quote from the Pew Internet & American Life Project director Lee Rainie, who was interviewed recently by The Washington Post:

“We haven’t reached this point yet, but there are reasonable thoughts that the book experience of the future will be dramatically different than today. It will be a multimedia [and] highly social [experience], and [it may] even incorporate a wiki experience.” 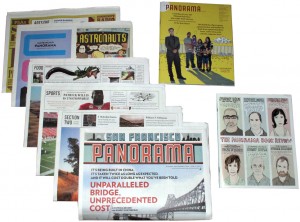 But regardless of all that, here’s a novel idea I’d like to put forth: Maybe instead of continuing to debate endlessly about the superiority or popularity of our industry’s various mediums—the backlit e-readers and the mini-tablets and the endless numbers of apps—we should start focusing at least a little bit more on the message itself, and the potentially life-changing ideas and innovations therein.

Let’s imagine for a moment, if we may, a white paper about the long-term cultural impact of hugely unusual print products like comic artist Chris Ware‘s recently published Building Stories, or the January 2010 edition of the San Francisco Panorama, a one-shot Sunday-edition newspaper published by McSweeney’s. Or how about an IBISWorld market research report that documents the various technological advancements that will one day become commonplace due to genre-busting digital experiments like The Silent History?

Unfortunately, those are all examples of the sort of scientific data extraction that isn’t actually possible (yet), but my point remains the same:  No matter what sort of digital or analog device we happen to be gathering information from at any give time, the truth is that for the majority of us who are heavily invested in reading, knowledge and personal growth seem to be the things we’re after. What else? Maybe a little entertainment from time to time, or even a brief period of escape from the real world.

And yes, I’m fully aware of the fact that I’ve contradicted myself. Because what else, after all, is a professionally-produced consumer trends report if not the pure epitome of verifiable knowledge? But I’m sure you get my point. After all, as the influential author and business thinker Daniel Pink once pointed out, it’s very likely that right-brainers will rule the future. Is it too much to ask for a Pew Research Center study or a Forrester Report that mixes a bit of creative thinking along with the dry data? (Again: I really don’t know.)

At any rate, as we move into 2013, a year that is all but guaranteed to be full of publishing industry surprises—some positive, no doubt, and some negative—those of us here at TeleRead sincerely hope that those of you who work within the content creation fields will bear in mind the huge importance of art and creativity and risk-taking, even where significant financial decisions are concerned. Especially where significant financial decisions are concerned!

And here’s hoping that by the time 2014 rears its head, the end-of-the-year industry reports will be packed full of ideas and words that barely exist today. I hope I can speak for all of you when I say that I can’t wait to see what this always-inspirational industry manages to cook up over the next 12 months.