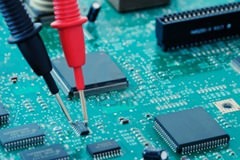 A few days ago, the Wall Street Journal ran an article on a subject near and dear to my heart, and of some degree of relevance to TeleRead readers, too. After all, you’re more likely than most to be using modern electronic gadgets. The Wall Street Journal points out that the problem with those gadgets is that they can be awfully hard to repair—especially when their manufacturers are reluctant to provide any help.

In the article, Geoffrey Fowler tells the story of a co-worker’s 2008 Samsung TV that went out, all because of one faulty capacitor on the main board. It turns out that some botched Chinese industrial espionage resulted in the manufacture of millions of faulty capacitors that ended up in all different brands of electronics—including Samsung’s. Don’t you just hate when that happens?

Consequently, the capacitor blow-out was a known issue with that model of TV, and Samsung had even agreed to extend the warranty an additional 18 months—but her TV was still out of luck. And the repair shop in the area would charge $90 for an estimate, and $125 plus parts for repair.

Rather than buy a new TV, Fowler did some online research and found that everything needed to repair the TV could be found in a $20 parts kit. Indeed, the process of repairing it was simple enough that the man who made a YouTube video demonstrating how used his toddler as an assistant. Fowler followed instructions, repaired the TV, and it worked!

The reason that this is of so much interest to me is that, from 2011 through 2013, my day job was working in a Teletech call center doing phone customer service and troubleshooting for Best Buy Exclusive Brands—Best Buy’s Insignia, Dynex, and Rocketfish store brand products, including all their TV sets. (For the first year I worked there, I took Geek Squad calls, then switched over.)

I wasn’t allowed to say so publicly while I worked for them—the rationale was that Best Buy didn’t want it bruited about that they outsourced their phone customer service, though that didn’t stop Best Buy or Teletech corporate from bruiting it themselves, so go figure—so I just recused myself from covering any Best Buy-related stories for TeleRead during my employment to avoid any conflicts of interest.

Samsung wants people to go to “qualified” technicians. In a statement, a spokesman said, “The technology found in TVs today is more sophisticated than ever before and often requires a level of expertise and technical proficiency to repair most of these high-quality products.”

That was effectively the line at Best Buy Exclusive Brands, too. We had access to repair manuals for our products, but we couldn’t send them to customers, nor could we give customers any information from them. The type of assistance we could give them in terms of true “technical” support was very limited. More than once I had professional or shade-tree electricians call in wanting technical information about the capacitors on the circuit boards and so forth, and I could only tell them I didn’t have it, nor was there any way to connect them with someone who would. The Geek Squad technicians who would repair the TV don’t assist customers over the phone.

Best Buy Exclusive Brands products could only be serviced by authorized repair centers, which were the Geek Squad technicians at the local Best Buy store (or, more likely, the regional repair centers that Best Buy would ship their TVs off to for fixing), or a few authorized independent TV repair shops in remote areas where there was no Best Buy. And that was that. Even TV repair technicians couldn’t get their hands on those repair manuals if they weren’t authorized affiliates of the Geek Squad service program.

Even just ordering complete replacement parts, such as main boards, could be fraught with difficulty. Due to the way the TVs were made, a given model of TV might have three or four different main boards available at PartStore.com, and the only way to tell which was the right one was to look up a long alphanumeric code string from the back of the TV—and many of the customers calling in couldn’t even find the model number, let alone that code.

The silly thing is, today’s televisions really aren’t any more complicated or technologically different than the personal computer I’m typing this blog entry into. I’ve never had much of a problem opening that up and yanking out and replacing circuit boards in that, and I’m no kind of certified electrician—and I’ve talked to non-electricians who did much the same thing for their Insignia TVs. I doubt I’d be much good at soldering capacitors into it, but Fowler’s no electrician either and he was able to get it done.

But what about smaller electronics, such as smartphones, tablets, or e-readers? Many of those are flat-out factory-sealed, to the point where you can’t even replace the battery yourself. Even some of Apple’s laptops are designed in such a way that you have to have an authorized service center replace the battery!

We end up taking all this for granted, because hey, it’s new technology. It has sealed units, complex circuit boards, and no replacement parts available. That’s just the way these new gadgets have always been—even the earliest models were released that way. Just look at my issue with my Kindle Touch. Even the manufacturer’s tech support says I should just buy a new one. (There is apparently some kind of repair OS rescue disk I can try to see if that clears it up, if I can find the time and interest, though.)

But on the other hand, manufacturers of products that have traditionally been independently repairable are now using copyright to prevent people from repairing their own purchases. Even automobiles and tractors are getting computerized enough that only manufacturer-authorized technicians are permitted to service them thanks to the anti-circumvention provisions of the Digital Millennium Copyright Act.

A few years ago we reported on an EFF effort to support “right to repair” legislation, but the law never made it through Congress, nor did a reintroduction of the bill a couple of years later. And the website of the coalition to support a right to repair doesn’t seem to have been updated since 2013. In the Wall Street Journal article, Fowler reports that there is state legislation under consideration in Minnesota, Massachusetts, and New York to require “digital electronic product” manufacturers to make repair information available to independent repair businesses, though the Consumer Electronics Association claims that sort of information could be “proprietary” and detrimental to the manufacturer’s competitive advantage.

Regardless, we should be paying more attention to this sort of thing. The only reason manufacturers are able to make these sealed products with non-replaceable parts is because we let them get away with it. Unfortunately, it seems unlikely that any sort of boycott or complaint campaign would cause them to change—too many people simply don’t care about the right to repair these products, which are becoming cheap enough that they can simply toss them and buy another one. But tossed products can end up in landfills, and we should give more thought to the future of our world.