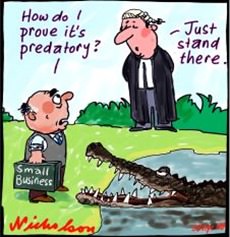 But in Michael Kozlowski’s world, it’s the publishers who impose “predatory pricing,” by pricing high. Noting the recent figures claiming that print books are rallying and e-books’ market share is declining, Kozlowski declares that publishers are pricing their e-books high to drive all the e-book stores out of business.

There are many companies that are heavily involved in the e-book sector that have went out of business over the course of the last year. Sony killed off their consumer e-reader division and abandoned the Reader Store in every country, but Japan. Diesel eBooks, Oyster, Entitle, Txtr, Blinkbox Books and others have all closed up shop because e-books are no longer profitable.

The reason why these companies went out of business is because of predatory pricing from the major publishers. If you have never heard of this term, it’s basically a pricing strategy that is intended to drive competitors out of the market, or create barriers to entry for potential new competitors. The fewer e-book stores that exist, the less sales the format generates, which is resulting in a resurgence of trade paperback and hardcover sales at the expense of e-books.

Another facet of this putative predatory pricing is the way publishers price library e-books sky high, so that libraries can’t buy as many of them on their tiny budgets.

Where do I even begin? Given how much publishers have complained about Amazon, and how it harms its competitors, it’s hard to imagine that publishers would intentionally try to drive those competitors out of business themselves. It’s not as if their prices can harm Amazon, which also accounts for 1/3 of overall and 2/3 of online paper book sales, after all.

Amazon’s big enough to weather pricing changes that could drive competitors out of business, and its own e-book sales are doing just fine—particularly independently-published e-book sales, which Kozlowski doesn’t mention. Indeed, if we count the Author Earnings figures as reliable, they’re doing better than traditional publishers’ e-book sales.

It’s not surprising Kozlowski would discount indie e-books, though, given that the last few posts of his we’ve covered invoked the refrain that self-publishing represented a tsunami of slush with little redeeming literary merit. From that perspective, it’s a bit odd to see him suddenly switch his sights over to traditional publishers.

I expect many e-book market watchers tend to set up a false dichotomy in their assumptions—that if you’re against self-publishing, you must necessarily be for traditional publishing, and vice versa. But it’s also possible to dislike both of them for similar reasons. For example, Kozlowski feels that publishers are harming libraries here, but he’s also complained that Smashwords’s library program made life difficult for librarians in its own way.

And though he doesn’t come out and say it as such, perhaps Kozlowski recognizes that, in harming the market for traditionally-published e-books, the publishers are throwing the gates wide open for self-published content to replace it. Given that Amazon tries to set itself up as an exclusive marketplace for a lot of self-pub content, including preventing them from selling it elsewhere if they want to have it in Kindle Unlimited, driving Amazon’s competitors out of business would thus benefit self-publishing, too. Though I think that take on things is probably needlessly convoluted and Machiavellian.

Either way, it amuses me to see that “predatory pricing” now effectively reduces to “any pricing strategy I don’t like”—whether it’s Amazon doing it with low prices or traditional publishers doing it with high ones as part of the very same overall dispute.