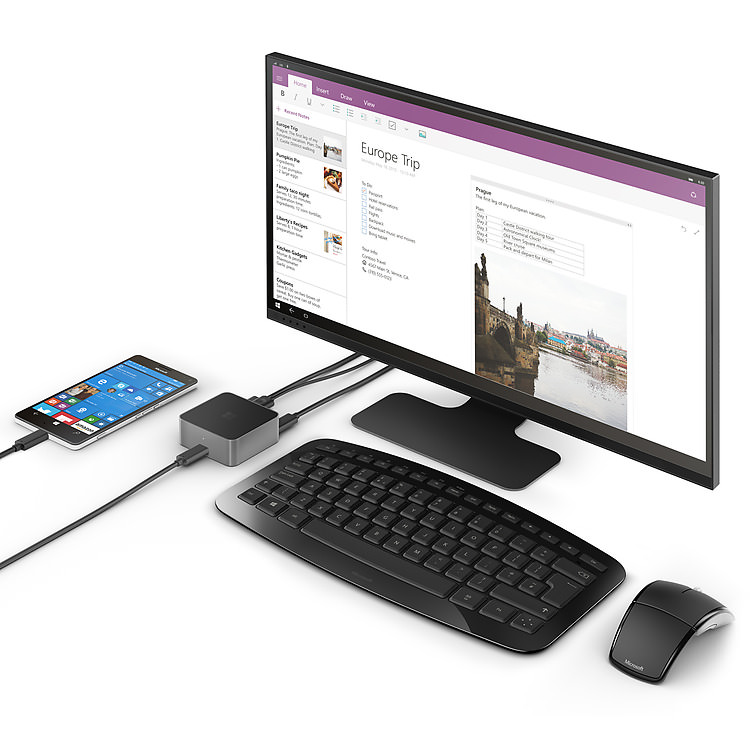 One of the highlights of Microsoft’s Windows 10 devices event, just completed in New York, was the reveal of the Microsoft Display Dock. This slightly-less-than-hockey-puck-sized device gives you the ability to connect your Windows 10 phone to a monitor and use it like a desktop PC. If it’s a Lumia 950 or 950 XL, that is.

Plug your Lumia 950 or 950 XL into a Display Dock and the external monitor starts up. The keyboard and mouse are ready to go, and with a 60 FPS refresh rate, catching up on email is flicker-free and super-smooth. With full HD output and a USB-C port that charges your phone while you work, it’s a quick and easy way to get the productivity advantages of using a bigger screen.

The Microsoft Display Dock supports DisplayPort over a USB-C connector, HDMI, and has two USB 2.0 ports and a USB 2.0 high current charging port. There’s also one USB 3.1 connector on the front of the dock to connect and charge the phone.

Continuum for Phones is one of those features many have been looking forward to to finally lever the power of today’s smartphones onto the desktop. And at first … ahem … glance, it looks like you’ll be able to do just that. You could throw your ereader’s screen up onto a bigger display any time you feel like reading – or sharing – a book on a larger monitor. The potential for teachers and business users, to name but two groups, should be obvious.

However, as I already reported, right now at least that functionality is limited to the new generation of Windows Premium Phones. At present, that means only the Lumia 950 or 950 XL. Those are two powerful and sexy-looking devices, even for a non-Windows Phone user. And one Engadget reporter … ahem …. reported during a Continuum demo in New York that “the ease with which these phones basically turned into tiny computers was near-astonishing.”

But most commentators are already also speculating that these new Lumia devices are flagship technology demonstrators rather than any serious attempt to shift numbers. So Microsoft Display Dock probably won’t be changing many ereading habits for now at least. Which perhaps is a pity.