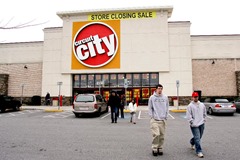 Today someone on my Facebook shared the homepage of the old Circuit City retail chain, with an announcement that it’s coming back to life under new ownership. Long-time readers may remember that Circuit City short-circuited in 2009 as an end result of making several terrible corporate decisions, not unlike Blockbuster and Borders a short while later—an ignominious end to 60 years in the electronic retail business.

A quick bit of research popped up a bunch of stories from January and February indicating that the iconic brand name has passed through several hands and is now being resurrected by a couple of retail-industry veterans. The chain will open a Dallas, Texas store in June, and  hopes to open 50 to 100 stores by next year. The plan is not to try to go big-box, like the old Circuit City, but to operate on a smaller boutique scale, selling tablets, headphones, drones, 3D printers, computer accessories, and other millennial geek fodder—not unlike Radio Shack, which has had problems of its own.

The store will reportedly feature touchscreen terminals to let shoppers browse through inventory, which is kind of interesting. In a way that, plus the boutique nature of it, puts me in mind of Amazon’s own bookstore experiments, which are effectively boutique bookstores that tie into the Amazon.com experience. It’s unclear exactly how these tablets will work. Will the new Circuit City simply store its inventory in a back room and bring it out when someone places a touchscreen order, using the space more efficiently than the usual stock-everything-on-the-floor retail mode?

It seems a bit odd that Circuit City would expect people to come to its store to shop on a touchscreen when they can already shop on the web from home or their tablets just fine. So maybe there’s some aspect of it I’m just not seeing yet. In any event, it’s amusing to consider the recursion and inversion of shopping for a tablet from a tablet—located in a retail store.

In any event, I bought my first Clié from a Circuit City, so I’m well acquainted with the idea of buying e-readers from such a location. But is there room in the current Amazon-dominated retail environment for a new boutique electronics store, even one with a recognizable and formerly-respected brand name—especially when the closest existing chain, Radio Shack, is on the ropes and soon expected to go the way of the original Circuit City? Well, maybe—if it can do things sufficiently differently from the way any of the current brick-and-mortar retail chains do it, and that different way works.