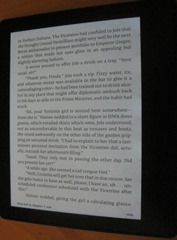 Although many users are happy with their new Kindle Oasis readers, it seems a good many of them aren’t. A ten-page-and-growing thread has sprung up on MobileRead’s Kindle forum complaining about uneven lighting issues that make it annoying to try to read. Some say that they see “shadow cones” on their screen, while others note the color temperature of the lighting seems to change from one side of the screen to the other.

Some users have posted pictures that purport to show the uneven lighting, though as one participant pointed out you can’t actually trust those because CCD cameras don’t pick up light in the same way as the human eye. His camera picked up shadow cones on his Oasis  (see photo at left) that aren’t visible at all to his naked eye. Forum reader Kolja reports:

I received my Oasis today also and have been trying to convince myself that the screen is fine as the device is great in all other ways. I’m one of those who sees the color shifts and the one I got has it. Overall the screen is much warmer than my Voyage and the color gets darker, almost yellow on the left. I can see slight brightness where the LEDs are on the thicker side and while minor I find it more distracting in the margin than it was on the bottom. I’m going to try reading with it for awhile to see if it bothers me enough to return it. Mine came from Best Buy and will be easy to return if necessary.

Other readers report fit and finish issues (as did some of the negative Amazon.com reviewers I mentioned the other day)—a crevice along the border of the screen where dust gets trapped, and jagged edges in places. However, others (including David Rothman and Len Edgerly) don’t report experiencing any of these issues at all. It’s possible that this may simply be a first-production run problem that affects some units but not others—one forum member notes that early Paperwhite and Voyage models had similar problem—and it might also be that some people’s eyes are more sensitive than others’ to color variations.

In any event, it might be a good idea to hold off on ordering it from Amazon until they have a chance to finish working all the kinks out of the manufacturing process. Otherwise, you might want to pick it up somewhere like Best Buy where you can hopefully unbox and examine it before you buy, or at least take it back somewhere close if it turns out to have problems.