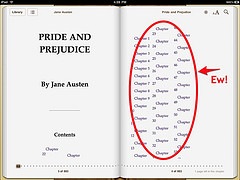 Debut Novelist Wins Canada’s Biggest Lit Prize (PW)
When the winner of the C$100,000 Scotiabank Giller Prize was announced at a gala in Toronto Monday night, the spotlight was on a new writer, Sean Michaels, and his debut novel Us Conductors, published by Random House Canada.
***

Ending Reader Comments is a Mistake, Even if You Are Reuters (GigaOM)
In a post about the decision, Reuters Digital executive editor Dan Colarusso describes it as a necessary evolution, brought about by changes in reader behavior.
***

Is Nonfiction eBook Formatting Still Terrible on Tablets? (The Digital Reader)
One might think that ebook formatting would be nearly perfect in 2014, but as we rapidly approach the Kindle’s 7th anniversary the Neilsen Group reminds us that badly formatted nonfiction ebooks are not hard to find.
***

One Man’s Diary of a Month-Long Library Closure (Book Riot)
Closed. Just like that. For construction. They’re adding on to the existing building, doubling the branch’s total size. Sounds like a great thing, right?
***

Kindle Daily Deal: The Boy Who Said No (and others)