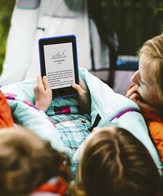 Amazon Debuts A $99 Kindle Bundle For Kids Including An E-Reader, Cover And Warranty (Tech Crunch)
This new package includes the combination of a Kindle e-reader, a durable cover, and an extended warranty on the device which protects against spills and drops. The Bundle is being sold for $99, which is a savings of $39.98 if all three items were purchased separately, notes Amazon.

The TeleRead take: Yes, this is a price-sensitive market. But next year when parts are cheaper than ever, how about text to speech capabilities for the millions of kids with learning disabilities? Even Amazon’s $200 Voyage lacks TTS. Sorry, Jeff. I love Amazon’s Kindle e-readers in general despite the proprietary formats, but on this topic I’m gonna keep beating up on you again and again until you comply with the spirit of the disability laws. Same for the need for the option of adjusting font weights, for kids and other who need more contrast between text and background. Meanwhile, for families not in need of TTS and changeable font weights, here’s a buying link to the $99 deal.

Should e-Reader Companies Focus on Android? (Good eReader)
In 2014, 8 out of every 10 phones that were shipped ran Android, and there are currently 4,000 distinct Android devices. Android has grown substantially over the years. These are staggering figures considering 600 million users have adopted smartphones over the past year.

The TeleRead take: Too bad it’s so often a “vs.” situation. I’d love to run Moon+ Reader Pro—only for iOS—on my iPad.  In the other direction, the iOS-only Voice Dream program would be great on my Android phones.

BookGrabbr Encourages Readers to Promote Books Online (Galley Cat)
The online marketing tool allows publishers to give away eBooks or sections of eBooks in exchange for a social share from consumers.

The TeleRead take: Tom Sawyer would love this. Let others paint the fence. BookGrabbr could be especially good for readers if the publishers are not too miserly with the excerpts—if they go beyond what’s already available at Amazon.

The TeleRead take: Fine. But what about a related issue, the reading divide? It’s not the same as the digital one. President Obama’s e-book plan for K-12 kids is a start, but hardly a substitute for a full-strength approach with a national digital library endowment and separate public and academic systems.

IDPF Holds Conference on “Putting Reader First,” Neglects to Put Any on Panels (Ink, Bits & Pixels)
Publishing industry insiders have paid hundreds of dollars per person to come to a conference and be lectured about readers while not actually getting an opportunity listen to readers, much less talk to said readers. There weren’t even very many panelists who regularly interface with readers; instead we got senior management from publishers and leading tech companies…

Yes, I do find the incongruity amusing. It’s like a bunch of teen-aged boys confusing talking about girls with talking to girls (to be fair, I don’t think boys would make that mistake).

The TeleRead take: TeleRead was one of the early popularizers of the IDPF’s ePub standard, created in response to our OpenReader campaign, and I respect the organization hugely. But over at I, B & P, my friend Nate Hoffelder is so right. Perhaps with more consumers able to speak up at conferences, the industry would be just a tad more aware of the billions that reader-hostile technologies like DRM will cost it over the years.

Kindle daily deals: Check out American Ghost: A Family’s Haunted Past in the Desert Southwest. Is this in fact, nonfiction? Regardless, for many, ghosts can be fun.