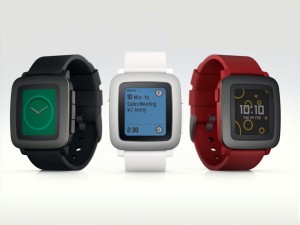 A Book is a Book: What is a Book? (Dear Author)
When you hear the word book, what comes to mind?

TeleRead Take: It’s a fair question. eBooks have been challenging the question. I think about it when I “report” finished books to Goodreads. Most of the time, I don’t bother with “books” which are really short stories. I suppose it skews the numbers, but who really cares but me?

Pebble Time review (Android Central)
Can the Pebble Time stand against the likes of full-touchscreen Android-based watches from the big players who make our Android phones? That was my question going into things. In some ways, it can (and actually does some things better) — and in other ways it can’t.

TeleRead Take: I’ve thought for a while now that if I were going to get a smartwatch, I’d go for a Pebble. I do like that eInk screen and the ability to use it on both iOS and Android.
***

My Smartphone Doesn’t Need to Be Revolutionary (Lifehacker)
In the last month, both Apple and Google had press conferences showing off their new operating systems. Both were met with a resounding “meh” followed by outcries that Apple’s just an imitator these days. Here’s an unpopular opinion: I don’t care.

TeleRead Take: It’s a fair point, I think. Those of us who love tech want the latest, greatest and coolest but the average user probably feels the same way as the author.
***

Bring a New Dimension to the Classroom – Verso for iPad (iPad Insight)
There are so many educational apps for iPad out there, many are total rubbish, some fall into the category of “Cool, but not quite good enough to give me a tangible educational benefit”. A select few though are real bankers and very occasionally, an app comes along which enables me to change something for the better in my classroom. Verso is one such app. The central premise of Verso is that it will collect responses, or answers to a stimulus and allows other people in the group or class to see them anonymously, which takes the worry out of who is saying what. The teacher, or group creator can see individual names of respondents so can see who as or hasn’t responded.

TeleRead Take: This looks like it has real potential. My teachers probably wish they’d had something like it when I was in school because, yes, I was one of those obnoxious students who knew all the answers and raised her hand constantly.
***

Kindle Daily Deal: The 5 Greatest Warriors (and others)