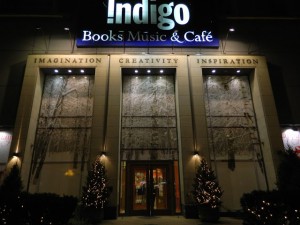 The Beginning of the End for Indigo Books in Canada (GoodeReader)
Chapters and Indigo Books has announced another quarterly loss of ten million dollars at a recent investors call. Revenue at Indigo and Chapters superstores declined 2.8% in the quarter, while Coles and IndigoSpirit small format stores were down 8.2%.
***

Booksellers Say no to Amazon Source (Publisher’s Weekly)
The fact that indie booksellers in the U.S. can now sell Kindles under a new Amazon program, Amazon Source, doesn’t necessarily mean they want to.
***

Why Designers and Developers Need to be Media-Agnostic (GigaOM)
In the past it was difficult for companies to leave the confines of their chosen medium, but not now. Behance co-founder Scott Belsky believes companies should be constrained by their missions, not the media they work in.
***

Confessions of a Booker Prize Judge (GalleyCat)
It is possible that the life of every Man Booker Prize judge ends in this way: sitting quietly in a café, sipping strong coffee, counting how much of your life has been lost to books.
***