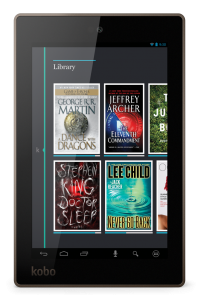 International ebook retailer and device-maker Kobo has launched a new fleet of e-reading and tablet devices along with an ebook store for children and a partnership with content aggregator Pocket — all aimed at helping Kobo win the fight for “people who have reading at the center of their lives,” according to Kobo chief content officer, Michael Tamblyn.
* * *

Can Slow-Moving Universities Adapt Quickly Enough to Change in the Digital Age? (Media Shift)
The start of classes this fall will also bring renewed debate about what journalism and mass communications colleges should teach in an age of disruption. Professors are trying to figure out how we should be preparing students for jobs that don’t exist yet. Or for jobs that will exist in two years, but won’t in four.
* * *

Children’s & YA Sales Down Nearly 27% (GalleyCat)
According to the Association of American Publishers (AAP) StatShot report for the first third of 2013, publishers saw total trade sales take a six percent drop.
* * *

Amazon Will Pay Developers Referral Fees for Selling Products Through Their Apps (GigaOM)
A new offering from Amazon lets developers earn referral fees by selling physical and digital products from Amazon’s catalog within their apps.
* * *

Kindle Daily Deals: “Murder as a Fine Art” by David Morrell (and 3 others)