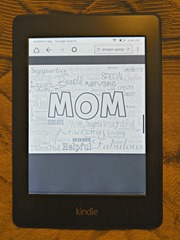 Does your mother read e-books? With Mother’s Day coming up in just two weeks, you might want to start thinking about what kind of gift to get her. In addition to the cheap e-readers I mentioned just a couple of posts ago, Amazon has just marked down four more until Mother’s Day.

These are in addition to the various other deals Amazon is running on different devices, some of which expire sooner than that.

Of course, there are plenty more places to buy than just Amazon, and plenty of other things to buy than the Kindle or Fire. If you think your mother would prefer a Nook, Kobo, plain-vanilla Android tablet, iPad, or whatever, go for it!You’ve got two weeks in which to find a good price and gift-wrap it. If you’re buying something locally then shipping it yourself, you should start early so it has enough time to get there. And now that I’ve nudged you about it, you don’t have any excuse not to think of it until the last minute!