A blog post by freelance journalist Nate Thayer has been making the rounds this week. In the post, Thayer shares an exchange he had with an editor at The Atlantic, who wanted to republish a significantly shortened version of a feature story he’d written about Dennis Rodman’s recent publicity trip to North Korea. When Thayer inquired as to payment, he was rebuffed and told the exposure of appearing in their publication would be payment enough; Thayer, a working professional, was offended and the story lit up the blogosphere.

Lost in the righteous indignation was the smaller detail, revealed by Thayer himself, that the editor told him The Atlantic is not actually opposed to paying its freelancers in principle. They had just used the budget up and were hoping they could score a freebie. Tacky? Almost certainly. But three stories coming out of the Canadian media this week gave me some perspective on stories like this. Consider:

1. From the fabulous Michael Geist comes this story about the National Post, a major Canadian daily, which has apparently signed up with a ‘licensing service’ service called iCopyright. This service has installed a plugin that issues a pop-up whenever somebody tries to copy text from an article, prompting them to pay a licensing fee. Geist points out that one is not legally required to do this. Copying short excerpts, even for republication, is fair use under Canadian law. Indeed, the story Geist cites an an example is itself a column that posts snippets from other media sources as a sort of daily news roundup. Of course, iCopyright can’t compel you to pay for stuff you don’t legally have to pay for. If you are astute enough to click the ‘quit asking me’ option, you can merrily copy away without further interruption. But no doubt, a certain percentage of people won’t know the finer points of the rules on this will, indeed, pay… 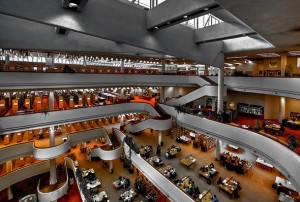 2. From the Toronto Star comes this article detailing a plan by the Toronto Public Library to raise some cash by printing advertisements on due date slips when customers sign out books. They hope to rake in $20,000 during the six-month trial. They quote two library officials, one of whom bemoans that the library is “sacrificing its reputation for a pittance,” and the other who flat-out admits, “we just thought it was an easy ticket to picking up revenue.”

3. Meanwhile, on the non-book side comes this article, also from the Star, about the struggles the local transit authority is having getting people to pay the tickets they issue for fare evasion, panhandling and other bylaw violations. They complain that their enforcement officers lack the authority to do much more than politely ask you to pay. Since they are not actual police, they can’t compel you to give a name and address if they ask for it. So more than 80 percent of the tickets remain unpaid.

What these stories, Thayer’s included, tell me, is that we live in changing times, and people are panicking because they feel like their business is threatened. So they are trying any old thing which might cross their minds in an attempt to recoup some losses and find a business model which works for them.

But here’s the thing—asking is not the same as receiving. Trying is not the same as succeeding. I don’t blame Thayer for holding out for a paycheck. But I also don’t think the editor at The Atlantic is the devil’s spawn for trying to score a freebie. She asked; Thayer declined; and presumably, he is free to look for his paycheck in other places. If enough freelancers show this editor that a freebie is not to be had, perhaps The Atlantic will raise their freelance budget. If enough of them take the bait and go for the ‘exposure,’ then they won’t. This is not a good vs. evil story. This is about a threatened business testing the waters to see what they can get away with.

Similarly, the Post and its odd little licensing click-through: As Geist correctly points out, you don’t have to pay them. But as he also correctly points out, it’s still a little slimy since some people probably will get scared into shelling out because they don’t know better. So I guess we’ll have to see how many angry letters of complaint they get on this. I am quite sure that if this backfires, they’ll remove the pop-up.

The only ones who are truly out of luck here are the local transit police, who actually are in the right but can’t do anything about it. But what they do show us is that asking for money, and getting it, are not the same thing.