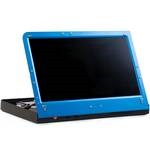 In January, I covered the hardware hackers who had created a design to build a completely open laptop computer from scratch—including designing and building their own custom circuit boards. It didn’t look terribly pretty, and it wasn’t cheap, but the designs were completely open and publicly available to all. They were planning to crowdfund the design and production of a more-streamlined version. At the time, I wondered what the crowdfunded version of the laptop would end up costing. Now we know. Wired reports that the campaign is ready to launch, and these custom machines are anything but cheap.

You can purchase a version of the machine, including the aluminum case, high-definition display, and motherboard for $1,195. For $1,995, you also get a battery and a 240 gigabyte solid-state hard drive. And the heirloom version sells for a whopping $5,000. “The heirloom version is for people who are ready to invest in something they would use for years and years,” Huang says. You can also buy just the motherboard for $500 and use it with your own case.

The “heirloom version” uses a handcrafted wooden case, whereas the regular one is aluminum. In order to be able to mass-produce it, the production design does use a few closed-source parts, such as the ARM CPU, but they tried to minimize those as much as possible. The operating system will, of course, be Linux.

Why so pricey? Well, the standard closed-source laptop is produced in huge numbers, so has a much higher economy of scale. When you hand-build just a few of a particular item, naturally it’s going to be a touch expensive.

And if you think $2,000 for an ARM-powered laptop is a trifle excessive, all indications are that when the crowdfunding campaign concludes and the laptops are mass-produced commercially, the cost will be even higher. Openness might be nice from a philosophical point of view, but one thing is perfectly clear: it doesn’t come cheap.

Update: On Twitter, Cory Doctorow says that he bought one. All I could think was, “Well, of course he did.”