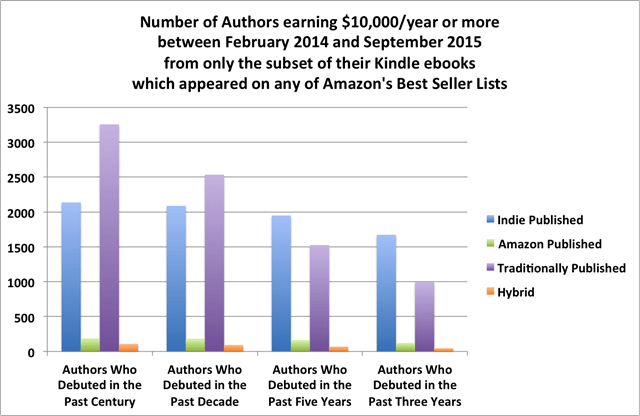 I ran across an interesting few articles lately that are interesting individually and juxtaposed.

For starters, John Scalzi takes the time to comment on that New York Times article that I mentioned yesterday. He scoffs at the latest Author Earnings figures on the basis of “the source [being] unabashedly pro-indie (and less-than-subtly in my opinion anti-publishing)” and thence opines that publishers know exactly what they’re doing in raising the price of e-books. They’re intentionally protecting the print market, Scalzi believes, at least insofar as the strategy touches on novels. (He’s quick to point out that publishers are doing other things in the digital marketplace, including his publisher Tor promoting e-novellas. Publishers, Scalzi believes, have different print and digital strategies for different areas.)

Scalzi casts this as a primarily anti-Amazon strategy:

Investing time in strengthening alternate retail paths makes sense in that case, especially if, as the article suggests, consumers are happy to receive the book in different formats for an advantageous price. If people fundamentally don’t care if they read something in print or electronic format, as long as they get a price they like, that leaves publishers a lot of room to maneuver.

That’s an interesting notion, not least because of the idea that maybe people really don’t care which format they get it in, as long as they get it cheap. While I’m certainly not in any position to be able to judge the truth of that, I will note that this strategy does serve to drive business not only to the remaining independent and chain paper bookstores, but also to Amazon, who still controls something like 1/3 of all print sales and 2/3 of all online print sales in the US. And they do so in a medium for which there is no agency pricing. Amazon can mark print books as low as they want to—and indeed, they’re often marking them to below the price of new-release e-books.

Scalzi also ascribes significance to the recent Authors Guild survey showing that authors are having a harder time making a living these days. Scalzi opines there are three kinds of authors: dinosaurs, who are tied to the old publishing model and might go extinct if it fizzles; mammals, who are profiting from the new indie model; and cockroaches, who adapt to market conditions, are largely model-agnostic, and will thrive no matter what happens. Scalzi writes:

Right now, I think publishing might be top-heavy with dinosaurs, and we’re seeing that reflected in that Author’s Guild survey.

What we’re missing — or at least what I haven’t seen — is reliable data showing that the mammals — indie/self-publishing folks, in this case — are doing any better on average. If these writers are doing significantly better on average, then that would be huge. It’s worth knowing.

Meanwhile, on The Passive Voice, Passive Guy posts one of his rare editorials about the content of the article, in which he notes that, though he has not yet been able to find an explanation of its methodology, he strongly suspects the Authors Guild survey was a self-selected respond-if-you-want-to poll the Guild sent out to its members.

PG won’t go into detail about the accuracy of various survey methodologies, but mailing (or emailing) surveys to all your members, then drawing conclusions from a return rate of 10-20% reliably shows nothing about the non-responsive 80-90%. The respondents are self-selecting and, absent real and reliable data about the differences between respondents and non-respondents, you can only talk about the 10-20% of authors who responded, not all authors or even all members of the Authors Guild. There are good arguments that, when a survey generates a poor response rate, the likelihood that the responders and the non-responders are different in significant ways is much greater than 50%.

Whereas Author Earnings, he notes, gets considerably more data because it isn’t self-selecting; it scrapes every bit of data that occurs for that particular day. Therefore it’s more thorough, and more likely to be a true representative sample.

And speaking of Author Earnings, it has come out with a report tracking the relative earnings of individual authors across seven quarters. For the purposes of the report, it narrowed down the 200,000 total authors it tracked to a subset consisting of 5,643 best-selling authors who made a $10,000-per-year earnings rate in at least two of those seven quarters. Acknowledging that it was surely only a subset of the number of total authors who were earning large amounts of money self-publishing, Author Earnings proceeded to draw what conclusions it could from the data that existed nonetheless.

The set of bars all the way to the right—the ones that represent authors who debuted within the last three years—tend to show the greatest amount of difference. And Author Earnings points out:

This, then, is the world that all new entrants — whether traditionally published or indie — face in 2015. If you’re a debut author in 2015 with a manuscript in hand, or even an experienced author regaining the rights to your backlist or starting out with a fresh pen name, when choosing your publishing route it’s that right-most set of bars in every one of these charts that is today most relevant to you.

So there are the very numbers John Scalzi wanted—numbers showing that his “mammals” are doing better. But Scalzi probably wouldn’t be inclined to accept them. In one of the comments under his blog post, Scalzi notes:

Speaking personally, I found AE’s historical bias and relatively poor handling and understanding of the data they have as it applies to publishing to be significant enough that my default position on it is to give it relatively little credence until someone else trucks through it and offers up commentary on it.

Well, fair enough. I suppose we’ll see who’s right in a few years, by which time nobody will even remember the doubts Scalzi expressed now.

For myself, I note that Scalzi’s idea that publishers might want to protect print sales is not anything new or novel. People have been decrying publishers as trying to protect print books with high e-book pricing for years now. Here’s David Gaughran discussing it in 2011, for example, and I’m pretty sure that was one of the theories floated for why many publishers never bothered keeping e-book prices commensurate with the lowest-cost print version in the days of eReader and Fictionwise. (Rather than the more likely explanation, that they just couldn’t be bothered to care much about or devote much effort to a market less than 1% the size of print.)

Is it true that people don’t care whether they read a book in print or electronic, as long as they can get it cheaply? If that’s the case, I’m not so sure publishers are doing themselves a service in pricing e-books out of range. E-books, after all, can’t (currently) be resold or bought used. And if price is the chief determinator of what format a customer buys in, don’t forget that many used print books are available for just a penny plus shipping on Amazon.

Finally, one other interesting thing I’ve noticed. I know that the Sad Puppies’ ideological split from the rest of fandom was on the basis of what types of stories they felt were being unfairly promoted, but I’m starting to wonder if there’s another one. Cedar Sanderson, one of the big Sad Puppies boosters, has written a number of times (including in an article I cited yesterday) on the importance of independent publishing. The Passive Voice is a stronghold of both indie publishing and Sad Puppy sympathy. And here is John Scalzi, one of the Puppies’ biggest adversaries (though perhaps more of the Rabid than Sad ones), downplaying the importance of Author Earning figures and opining in favor of the traditional publishers (with whom he recently signed a big multi-year deal).

Update: This post has been linked by and is also under discussion at The Passive Voice.