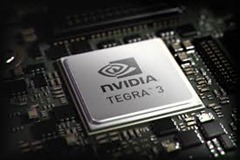 The system-on-a-chip technology that powers modern tablets and e-readers has some very interesting spinoff applications available. ReadWrite has a feature on the onboard “supercomputers” that more and more cars are now getting—computers based on the nVidia Tegra, the same processor that powers tablets like the Asus Transformer and the Google Nexus 7.

The computers will be used to display dashboard information, read sensors to adjust the car automatically for road or weather conditions, and even monitor the identity and condition of the driver.

Imagine the processing power needed for this scenario coming soon: The car’s processing unit is running the dashboard, rendering speed and engine functions as you like, while the ultra realistic, [Google Maps] Street-View-fed navigation system guides you to a destination set by voice command, as the kids enjoy a streaming Netflix movie. A camera aimed at the roadside detects speed limit signs, and presents them on the dashboard.  Radar and Lidar data are run in algorithms 30 to 60 times a second to keep track of all traffic, differentiating between other cars, or maybe a kid running across the street—readying the car to apply brakes as necessary.

I imagine that the displays that show Netflix movies could also be used for e-reading, assuming the applications can be loaded on board.