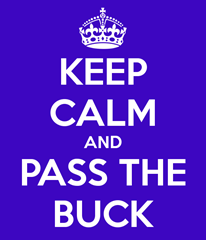 Ad-blocking has suddenly become a contentious issue now that that Apple’s enabling it, hasn’t it? Maybe it’s going to “help content evolve,” as Joe Wilkert puts it, but a lot of people still don’t seem too pleased about it. Here’s a little round-up of a few stories that just caught my attention.

First off, Anil Dash posts an essay on Medium declaring the entire concept of on-line advertising to be one long chain of blame-ducking and passing the buck. (Found via BoingBoing.) Effectively, everybody from the journalist to the reader blames someone else for ads being necessary, annoying, or blockable. (I was tempted to dig up one of those Family Circus cartoons with Billy blaming the ghost-like “Not Me” figure to use as the image with this article, but decided that even the thumbnailing fair use exemption would be stretching a point for that.)

Dash notes that, in an infrastructure where buck-passing is the norm, “any acceptance of responsibility is seen as apostasy.” He points to Marco Ament’s decision to withdraw the iOS ad-blocker Peace and its users’ subsequent anger as an example of this. People dislike being tracked or annoyed by ads, and it’s too hard to figure out anything else to do about them, so they block them.

The thing is, technology is not neutral, algorithms are built with values, and the default choices in our software determine huge swaths of our culture. We delegate ethical decisions as consumers and citizens to people make software, but almost no computer science program teaches ethics, and almost no major technology company has a chief ethicist.

Dash suggests that we should take responsibility instead of just blocking stuff. (The writers of “The Ethical Ad Blocker,” a Chrome extension which blocks not only the ads but all the content of any site containing advertising, would probably agree.)

Not everyone agrees with this, however, Commenter Andy Lundell calls out Dash for making the false assumption “that ad-blocking is morally wrong, and that therefore someone must be ‘at fault.’”

The fact that you have failed to create a profit for someone doesn’t change that truth, You’re under no moral or ethical obligation to make a profit for anybody but yourself.

If we have to talk about “fault”, let’s talk about who is at fault that an entire industry has become so broken, that even normally compassionate writers like Anil Dash can only defend it by taking this sort of hard-line, conservative stance against the rights of the individual.

Meanwhile, the CEOs of two trade associations devoted to digital content and newspapers have posted an op-ed to Re/Code, pointing out that “traditional” web advertising (which they refer to as “Advertising 1.0,” because maybe using program version numbers to refer to something didn’t go out of style ten years ago after all) has partaken in a feedback loop where, as consumers pay less attention, advertisers make their ads increasingly obnoxious, whereby consumers pay even less attention, so web advertising by now become so polluted that it’s no miracle people are rejecting it. They point out that 200 million people are now blocking all ads, though I don’t know where they got that number or how valid it is.

And they compare the web to other forms of media in this respect—in this case, digital music. (Which puts me in mind of how Wilkert compared it to cable TV in his post I linked above. Is the only way people can understand ad-blocking to compare it to something else?)

The CEOs call on publishers to “lead Advertising 2.0,” and redefine how advertising works from the ground up. (Because apparently just patching it to “Advertising 1.1” wouldn’t be good enough. But I suppose the analogy only goes so far.) On behalf of their trade organizations, they ask all publishers to “join the global discussion on what the principles of Advertising 2.0 ought to be”.

Well, I suppose now that they’ve called for people to join the discussion, there actually will be discussion. It’s not as if everyone was discussing it already in columns and essays everywhere or something…oh, wait.

Even with that being said, it’s not as if there’s anyone in charge of publishers to impose a solution or even moderate the discussion, so it’s unclear how effective the publishers will be even if they do step up and try to come up with ideas. But I suppose something will shake out sooner or later.

Finally a Wall Street Journal article reports that Crystal, one of the iOS ad blockers that Marco Ament suggested people move to after he pulled Peace, has decided to throw in with the AdBlock Plus people, Eyeo, who permit some “acceptable” ads through their adblock gateway if advertisers (such as Google, Microsoft, and Taboola) pay them. Like Ament, its developer feels concerned that giving readers a way to block all ads “doesn’t provide any way for users to support publishers.”

[Crystal developer Dean] Murphy said he has taken Eyeo up on its offer, and plans to implement an option within his app whereby “acceptable” ads will be displayed to users. The feature will be switched on by default, Mr. Murphy said, and he will receive a flat monthly fee from Eyeo in return. Mr. Murphy declined to disclose the fee, but said he expects to make less money from Eyeo’s payments than from sales of the app itself.

As Nate points out at The Digital Reader, it’s one thing for Eyeo to take payment for allowing ads through its free AdBlock Plus product (which is one reason I don’t actually use them myself; I use the plain-old AdBlock non-plus, because I’m nonplussed with AdBlock Plus), but Murphy already sells his app for 99 cents, and doesn’t even expect to make as much from Eyeo as from his sales. So he’s basically selling out his users to salve his conscience. On the bright side, at least he permits users to switch the feature off—but if he’s serious about wanting to give users a choice, he ought to have the feature switched off by default, so it’s their choice to switch it on.

If readers want to “support publishers,” it ought to be their choice, and it ought to be the publishers who enable it. For example, Ars Technica permits readers to subscribe to its premium service, which turns off advertising. Even Hulu recognized that viewers hate seeing advertisements, and recently implemented a plan where its subscribers could pay $12 a month instead of $8 in order to remove most ads from their shows.

It’s not up to the software that blocks the ads to try to support the publishers, too. Readability tried that, and it didn’t work.

All this is a fairly long-winded way of saying that ad-blocking continues to be controversial. At this point, I’d be very surprised if it ever wasn’t.