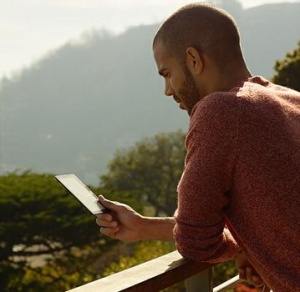 Have you ordered an Amazon Kindle Oasis despite the $289 price? If so, why? The smaller size than the Paperwhite’s? The page buttons? Although Amazon sadly has not improved the screen contrast, one of my particular fixations, I myself have an Oasis coming later this month so I can keep up with the tech. Perhaps if enough of us speak out, Amazon will add all-text bolding or a font-weight adjuster as an option to boost the perceived contrast.

Meanwhile here’s a burning question. The Oasis comes with a charger-cover that extends battery life, but it will add to the Oasis’s weight. Will you read with the cover on or off? MobileRead is running a survey on the issue. The number of respondents so far isn’t high, just 43, but here’s the breakdown:

“The whole reason for me to get the Oasis are the buttons,” Atunah writes on MobileReader, “and to be able to hold it in my hand with the shape it has. I read my Voyage without the cover now as I need it as light as possible. But even then because of how its shaped and where the haptic buttons are, my hands cramp up after a while. They just aren’t in a place that is natural for my joints, thumb and wrist. I fell out of my hands a few times on the sofa because of how the weight distribution is.

“I think the Oasis solves that for me as all the weight is in the palm, so no dripping out of my hands while trying to press the page press. And the buttons are actual buttons so I know where they are at all times. And the larger bezel prevents me from constantly changing pages, highlighting stuff as I am doing right now with the Voyage.”

I myself will probably read with the cover off, normally, and use it as a charging dock.

Even if you don’t have an Oasis on order, I’d be curious about your thoughts on covers for E Ink e-readers. For the added protection if nothing else, are they worth the trouble and the added weight? Meanwhile a separate poll shows that four-fifths of E Ink reader owners use the covers (even if they’re not necessarily always on).