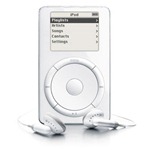 Ten years ago, the original iPod came out, changing Apple inexorably from a snooty little computer company whose best days were seemingly long behind it to one of the greatest powerhouses of the consumer electronics industry. Today it seems likely Apple is going to kill off the last vestige of that original hard-drive-and-music-player-only device.

Yesterday Gizmodo took a look at some of the complaints and erroneous predictions of low sales surrounding the original device, and pointed out a CNet review by Elliot Van Buskirk predicting that descendants of the iPod might replace the PC.

The funny thing is, even Van Buskirk didn’t get it quite right. He was focusing on the way that the iPod could also act as a 5 gig portable Firewire hard drive, allowing people to schlep huge files around easily. Van Buskirk saw the iPod as being a precursor to a bigger portable hard drive that people could connect to any device they wanted in order to use the files therein: “If I’m right […], people will use one comprehensive iPod-like storage and connectivity unit in combination with every specialized peripheral you can think of.”

And while the iPod did indeed see some of that sort of use (most notably, it was used for transferring digital copies of footage from New Zealand to England for special-effects work on the Lord of the Rings movies), its contribution to the “replacement of the PC” really came when it transformed into the iPhone and iPod Touch, which eventually led to the iPad and the rise of the tablet that followed.

As for portable hard drives, we now have USB thumb drives with many times the capacity of that original iPod at a much smaller size, and they don’t come with the vulnerability of physical hard drives to shock and jostling that leads them inexorably to fail sooner or later. But those don’t show any sign of “replacing the PC”.

And now the iPod Classic is apparently ready to follow its originator Steve Jobs out the door. It seems kind of fitting, in a way, that the Classic goes out at the same time as the man who transformed Apple when he introduced it to the world. I can’t wait to see what the future looks like.