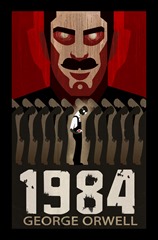 Torrentfreak reports that the George Orwell estate is cracking down on people selling T-shirts referencing Orwell’s novel 1984, claiming that they represent copyright violations. They go on at length over the irony of this move. They also note that you can’t copyright a title.

Torrentfreak doesn’t mention that you can trademark a book title—but as Nate Hoffelder notes at The Digital Reader, the Orwell estate doesn’t even have a registered trademark on 1984 either. (At least not in the US, whose database Hoffelder checked.) That said, even an unregistered trademark is still eligible for protection when it’s being used in connection with sales to the public.

To be fair, thanks to the powerful nature of Orwell’s original novel, 1984 has entered popular culture as a catch phrase for censorship and fascism. That’s why Amazon pulling bootleg editions of Orwell e-books from purchasers’ Kindles back in the day was so ironic, and why Torrentfreak thinks the Orwell estate’s T-shirt move is ironic now.

Hence, someone making a T-shirt that references “1984” in that sense is pretty obviously referring to the still-under-copyright book—trying to play coy and pretend you’re talking about some other 1984 wouldn’t wash. There simply isn’t any other sense of “1984” that’s so ominous and portentous.

(But meanwhile, my friends back in Springfield, Missouri who run a vintage video arcade called 1984 would probably be perfectly safe; there’s nothing about Spy Hunter and Centipede consoles to suggest fascist government domination, and they could simply claim it’s when some of their game consoles were released.)

But then, there isn’t a DMCA equivalent for trademark takedowns. They would have to send a cease-and-desist letter the old-fashioned way, and couldn’t get the offending material yanked down instantaneously the way they could for copyright violations. On the bright side, this also means that a DMCA counter-notice ought to be sufficient to get the work back up, and a copyright lawsuit should be easily dismissed. (Sadly, there’s still no enforcement of the provision that’s supposed to prohibit DMCA misuse.)

But if the Orwell estate should decide to try to attack the T-shirts on trademark grounds, it would be interesting to see how it came out.