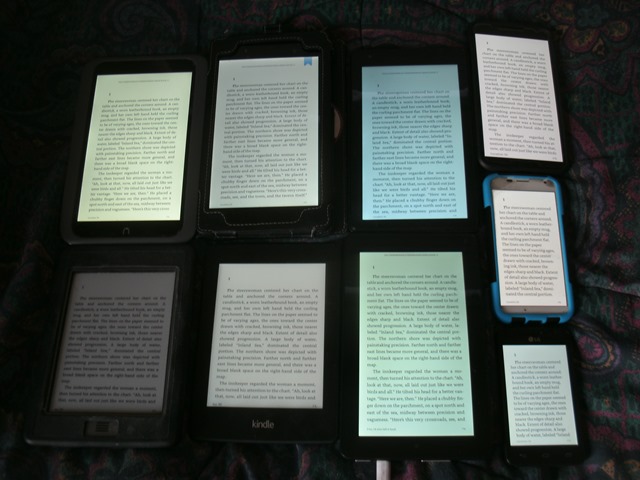 How did that happen? It seems like I just turned around and I have nine fully-functional e-reader devices in my possession. I’ve looked at some of these before, but they’ve multiplied since then.

Left to right on the top row, those are my Nook HD, my 2013 Nexus 7, the RCA Voyager II Nate sent me and I still need to review, and my 2013 Nexus 6. On the bottom row are my Kindle Touch, Kindle Paperwhite, $50 7” Fire, 1st-generation Motorola Moto X, and the $10 LG Sunrise smartphone right below it.

They’re all open to the first page of The Steerswoman by Rosemary Kirstein, and the fonts set to as close to the same size as I could get them, to provide a clear means of comparison of how much you could read at once given the relative screen sizes. All except the Kindle Touch at lower left are using the Bookerly font (the Kindle Touch doesn’t have it).

What’s the best reading device out of all of them? In some respects it’s hard to say, but I’m actually leaning toward the Nexus 6 smartphone. 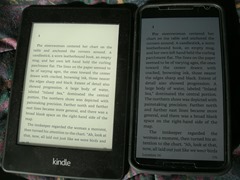 The Paperwhite fits just fine into a ziplock sandwich bag for reading in the tub, but then, so does the Nexus 6. But the most compelling feature is the Nexus 6’s sharpness and crystal clarity. That’s something else I wasn’t expecting when I compared the two by reading the same document on both, but the Nexus 6’s screen is actually sharper and clearer than e-ink.

It’s not such a big surprise if you compare the screens’ specs—the Paperwhite has a 300 DPI screen, about on par with my Nexus 7 tablet’s, while the Nexus 6’s 1440p monster is about 500 DPI—but it’s not what you would expect given how e-ink is commonly considered sharper and clearer than LCD in general.

It’s also not a big surprise considering that the Nexus 6 has literally the best display of any digital product I own—including my two desktop monitors, which top out at 1080p. My phone is 1440p—and it can shoot 4K video. I’m still kind of stunned that I can now shoot video that I have no way of viewing in its full resolution. The display makes it great for watching movies, too; it can show 4K videos in 1440p, and it has stereo speakers built in above and below the screen that are useful for games, too.

Another milestone this device represents is that it’s the first phone I’ve owned with a better built-in camera than the 12.2 megapixel point-and-shoot I used to take the device photos above. This one can do 13 megapixels in the rear camera, and it looks pretty good, too. Just look at this shot I took out my window of the snowy street and field behind the apartment building in which I live.

But getting back to e-reading, the Nexus 6 has the advantage of being a bog-standard Google Android device. This means it’s got the Play Store on it, and access to everything the Play Store can provide—including myriad e-reading applications. It also means it has a minimum of OEM cruft. The OEM in question is Motorola, who has ample experience building to Google spec—it used to be part of Google, after all.

The Android apps I usually use for my day-to-day reading, such as the RSS reader Press or the social media browser Flipboard, both look great on a screen this size and clarity. Instapaper is easy to read, too. And of course Kindle, Google Play Books, UB Reader, Moon+, and others work just fine.

The upshot is, the Nexus 6 reads e-books at least as well as any other Android device, its recent processor means it loads them fast, and its high-definition screen means it reads them in crystal sharpness and clarity. And while it’s big enough to show a lot of text, it’s also small enough to fit in my pocket.

There was one setting that turned out to be unexpectedly useful. I only turned it on as an experiment while fiddling with other settings, but discovered I liked it enough that I kept it turned on. That was the “Large Print” option under “Accessibility Settings.” It’s a little disheartening to realize I need it, but it actually does help. I can more easily read the text under icons, and in applications that make fonts larger based on that switch. Even Ingress, the game I play, takes heed.

I haven’t had a lot of trouble using it one-handed when I need to. The most I’m ever likely to need to do one-handed is tap a button or two—to take a photo, or hack a portal in Ingress as I bicycle past—and the button positioning is generally such that I can do that easily with a thumb. Turning pages in e-books isn’t a hardship, either—especially for readers that have the option to use the volume controls to turn pages. It makes them effectively work like the page-up/page-down buttons on e-readers that have had them. Since they’re right under my right thumb when I’m holding the phone in my right hand, that means I can flip pages without even needing to tap the screen.

About the only things I miss from the Moto X are things that don’t have to do with the larger size. The ability to launch the camera by flicking the phone twice, for example (though I gather I can retrofit that with an app), or the ability to take still photos while taking video (apparently you can’t do this with the Nexus 6).

Really, the Nexus 6 is enough of a general-purpose Android device that I’ve started leaving my gadget bag at home when I go some places, and just taking my Karma Go and a rechargeable battery pack or two. I no longer feel like I’m handicapped by only having a phone when my phone is this big and capable—be that for e-reading, web browsing, or anything else.

It’s worth noting that an unlocked Nexus 6 is currently on sale on Amazon for $300 in 64 GB, or about $230 in 32 GB. The Midnight Blue 64 GB version is new and ships via Amazon Prime; the others are from third-party vendors, may be new or used, and don’t ship via Prime. It’s a pretty good deal, especially if you’ve gotten an invitation to Project Fi.