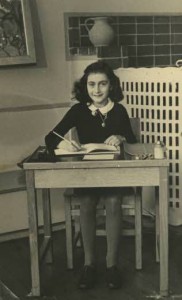 A disturbing New York Times story illustrates perfectly the dangers of over-corporatizing the public domain. The Anne Frank Foundation, which has been administering the copyright of Frank’s famous diary, has been trying to retroactively add a co-author to this book in order to prevent it from entering the public domain. As the New York Times explains:

“Copyrights in Europe generally end 70 years after an author’s death. Anne Frank died 70 years ago at Bergen-Belsen, a concentration camp, and Otto Frank died in 1980. Extending the copyright would block others from being able to publish the book without paying royalties or receiving permission.”

There are a few issues here. First, where this particular topic is concerned, profit should not be the motivating factor. My Grade 3/4 class recently read a book called ‘Hana’s Suitcase,’ about a Holocaust education group in Japan that used one girl’s story as the basis for introducing students to this topic. One of the things the director of the group struggled with was that Japan had very few survivors of such events anyway, and with the passage of time, even fewer. Many students had never studied the events of the Holocaust before. I think that Anne Frank’s famous diary deserves to enter the public domain at its appointed time because her work can be so important in sharing this important era of history with young people who will increasingly have less and less real context for it.

Secondly, I don’t like the idea that one can retroactively apply a co-author like this. If Otto Frank was indeed a ‘co-author’ and not merely an editor or compiler, that should have been established from the outset. Adding it now, just as the copyright term is about to end, feels under-handed to me and I don’t think they should be allowed to get away with it. Nobody is stealing anything from the heirs of Otto Frank, or this foundation. They had 70 years to profit from a work that none of them created. Why is’t that enough? Why should their financial interests over-rule the good this work can do if it is allowed to be freely built up, studied and distributed now that its proper term of copyright is over?

Related: Cory Doctorow’s thoughts (via Nate), including his belief that a pro-Frank Foundation ruling could actually subvert the rights of writers.