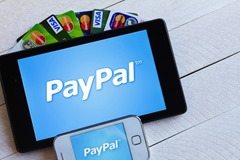 PayPal has just announced some important changes to its mobile apps. Starting in June, Android and iOS users will be required to upgrade to version 6.0 of the PayPal app—but from our perspective, the more important thing is that, as of June 30, PayPal will be dropping support altogether for PayPal apps on Amazon Fire, Windows Phone, and Blackberry. Users of those platforms will be able to continue using PayPal via the PayPal mobile web site at http://m.paypal.com.

It’s not exactly a surprise that PayPal’s dropping support for the anemic Windows Phone platform. As for Blackberry, the only surprising thing is that PayPal’s kept supporting an app for it for this long. But dropping support for the Fire, in all likelihood the most popular budget-priced tablet, is a bit startling—especially given that the Fire can run almost all plain-vanilla Android apps just fine if there’s a way to install them. (My own Fire, which has the Play Store on it, was able to install PayPal 6.2.2 from Google Play with no difficulty.) Indeed, putting it on the Fire would just be a matter of putting it into Amazon’s app store with no other changes necessary.

But perhaps, given Amazon’s own Amazon Pay platform, PayPal simply doesn’t want to give that degree of support to one of its own close competitors in the online payment field? It seems a fitting theory to me. PayPal knows anyone who depends on it isn’t about to stop using it anyway—they’ll just switch to the mobile web site if they have to. But it might turn some people off of the Fire and onto other platforms where they can keep using a PayPal app.

Meanwhile, Fire die-hards can install Google Play to keep using the Android version, or else use Evozi’s APK Downloader to snag the PayPal app from the Android store and sideload it onto their Fire.