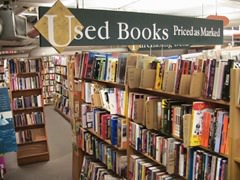 Ever wonder how Amazon dealers were able to afford to sell used books for a penny plus $3.99 shipping? The New York Times has an article looking at how these operations work. Effectively, used-book operations are able to ship efficiently enough that they can make a few pennies’ worth of profit out of that $3.99 shipping fee, so they can earn a little money on each penny book they sell. Further, penny books are only about half of the business they do, which means that any used books they sell for more than a penny are effectively pure profit.

While there may still be solo operators who trawl book sales with PDAs looking for in-demand titles, these big operations effectively just buy everything and, after discarding obviously damaged books and other trash, throw it all up on Amazon using their automated systems.

The details of how these operations work is interesting enough all by itself, but the most interesting part is the effect they’re having on brick-and-mortar used book stores. In spite of expectations when Amazon first started listing used books alongside new, they haven’t harmed new book sales much. However, brick and mortar used-book stores are another story.

If the penny booksellers haven’t noticeably cut into the publishing industry’s margins, their arrival has been more ominous for traditional used-book retailers. “It’s really a race to the bottom at this point,” says Carson Moss, the store buyer at the Strand, the 88-year-old Manhattan book emporium. “Everybody ends up fighting over 5 cents, 10 cents, a penny.” Moss says the penny booksellers are an occasional topic of conversation at the Strand, which also sells books on Amazon and elsewhere online. “I would say it has affected our ability to sell as many used books online,” he says. The penny booksellers are sometimes seen as forcing books into a new, disturbingly quick life cycle in which prices drop from full price to a few dollars in months, and then further to a penny in just a couple of years.

It makes sense when you think about it. If someone really wants a new book, they’ll buy a new book. They’re not likely to be diverted to buying a cheaper used one just because it’s there. But if they want a used book, where previously they might have gone to a brick and mortar store to find it, now they can get it from the same place where they could have gotten a brand new one. So it’s the brick-and-mortar used stores that are taking the big hit from Amazon selling used.

I remember back in my childhood, you could take your used books in to the stores and get a decent amount in cash, and more in sales credit, from trading them in. That’s just not realistic anymore—they just aren’t selling well enough that people can afford to pay for them. They’re a drug on the market, and those discussions from a few years back about whether second-hand bookstores should have to pay royalties now seem quaint and old-fashioned. Second-hand bookstores are apparently an endangered species.

By the same token, the argument that a thriving second-hand market is important because it lets consumers know they can resell a book if they don’t like it also seems old-fashioned. Who’s even going to buy your unwanted used book anymore? You could list it on Amazon, but then you’ll have to wait until someone actually wants it to sell it, and you also have to package it up and mail it out.

This in turn could make e-books more attractive, at least to some people. You’re no longer buying things that fill up your shelves and you probably can’t get rid of. And if you can’t get rid of e-books, either (at the moment, anyway, though there’s some movement in Europe to support it), at least they don’t produce more clutter.

It’s funny to consider that, for all that publishers have complained about used books, in the grand scheme of things they don’t really seem to care that much. If they did, they’d be putting all their effort behind selling e-books, which after all can’t be re-sold so can’t compete with “new” versions of themselves. Instead, they’re pricing e-books out of range and seem happy their sales are going down while print sales are going strong.

Which, I suppose, just goes to show how upset publishers really are about used books. Even when Amazon, their most loved and hated frenemy, is selling them for a penny each, they can’t seem to work up a whole lot of concern. But let Amazon discount e-books, and it’s the end of the world.