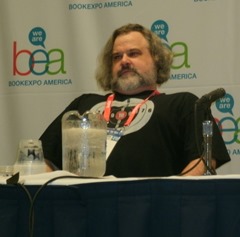 It can be entertaining to watch a good fight sometimes. That’s the case concerning a recent post by Porter Anderson discussing the question of publisher pricing on e-books, and a response by Joe Konrath defenestrating it. (I met both Anderson and Konrath at BookExpo America this year, so it was a pretty red-letter convention for me.)

Anderson, in kind of a long and rambling way, considers the problem traditional publishers and their authors face in the form of competition from much cheaper self-published e-books. It’s full of discussion of consumers “value perception of our quality content,” authors complaining about readers getting their e-books cheaply, and the importance of traditional publishing’s “dignity.”

He also complains of, effectively, all those unwashed barbarians at the gates:

And we can look to our cohorts in Hollywood for a little guidance here, too. You may not remember what the advent of Blockbuster video and then Netflix did to film. But those of us who watched those developments roll in know. Suddenly there were films everywhere, peopled with actors who are not quite the stars they look like speaking dialog that’s as wooden as they are, in strangely unsatisfying knockoffs of other films.

So many self-published authors sell for cheap or even free because it’s the only way they can get noticed without a publisher to promote them, Anderson contends. And then most of these cheap or free e-books languish unread.

It’s a little hard to puzzle out the point he’s trying to make in this piece, just because it rambles so much. By and large, it tastes of sour grapes—who do these self-publishers think they are, selling their trash so cheaply while our Great Literature languishes unread and unloved at higher prices?

And that seems to be where Joe Konrath comes in, with his response. I tend to find these defenestrations a little hard to read, given that they alternate bold text with italics and it can be a little hard to put the context together. By and large, I think I might prefer a single block of text that addressed the cogent points one by one, rather than an email-style quoted reponse. Still, Konrath makes some good points. If traditional publishing partisans want to gripe about their own high prices, they’ve got nobody to blame but themselves. Konrath writes:

When technology cuts out middlemen, costs (and subsequently prices) drop.

Publishers didn’t drop prices even when they no longer had to pay for shipping, printing, warehousing, distribution, and returns. They suddenly had more money because they didn’t have to pay a myriad of middlemen for ebooks. And rather than share that extra income with authors, publishers kept it all for themselves.

So authors like me decided we didn’t need publishers, and now publishers feel threatened. Boo-hoo.

In response to an author’s complaint of readers who only download giveaways and never buy books because they don’t have to, Konrath notes that lending libraries and other free sources of books have been around for centuries, yet the publishers haven’t attempted to close them.

Furthermore, readers have always had a lot of choices, and reading isn’t a zero-sum game. People read multiple books—reading one doesn’t mean they can’t read another.

And in response to the above quote about Blockbuster and Netflix leading to unsatisfying knockoffs, Joe writes:

Translation: When you lose control over distribution, cheap knock-offs abound and eat your lunch.

I’m fine with you calling me cheap. Why should I care? Your lunch is delicious. I bet you really enjoyed it when it was still yours.

He also pooh-poohs the notion that authors go cheap because it’s the only way to get noticed. In fact, very few traditionally-published books get much marketing either, and cheap e-books don’t have a monopoly on languishing unread. And self-publishing royalty rates are a lot better than publishing rates, which means authors can keep their prices low and yet earn a lot more on each sale than they could via traditional publishing.

Anderson also quoted Joe Konrath from his BEA panel I took in—the line about reaching more people by signing with a big publisher—and Konrath said Anderson took the quote out of context and that most people would make more money by self-publishing instead.

It’s an old, old argument, and it continues unabated. I have a strong suspicion that both sides will keep going around and around, with no major changes, until and unless something serious happens to affect the balance of the industry. Will publishers eventually realize that rampant agency pricing really is harming their brands, and consumers simply don’t need them anymore? Will they adapt to the new reality, or will they try to sue someone?

I suspect it may also depend on the question of whether e-book adoption really has stalled out as Amazon opts to concentrate on media tablets rather than e-ink readers, as that other panel I took in at BEA suggested. If e-books are going to stay in a distant second-place to print books, it may be that publishers will just refocus their attention on making the most they can out of print and cede e-books to the self-publishing field. I guess we’ll just have to wait and see what the future holds.