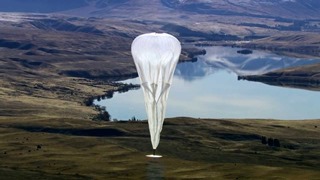 E-reader users dismayed by Karma Wireless capping its Neverstop plan to 15 GB per month may soon have reason to hope for something better. Two new stories to emerge in recent days suggest new options may soon emerge. As we reported in November, Google’s “Project Loon,” a plan to provide wireless Internet via transceivers suspended from high-altitude balloons, is about to begin testing in the USA. At the same time, the founder of Aereo, the start-up that attempted to deliver broadcast television signals via the Internet until the courts shut it down, wants to provide gigabit wireless Internet via millimeter wave bandwidth.

The latest Project Loon news comes by way of a report Google has just filed to the FCC, declaring that its balloon Internet tests pose no health threats to people or the environment. The reason such a report was even necessary is, of course, that the proposed advent of Project Loon has brought all the other kind of ‘loons’ out of the woodwork—all those people who insist against all scientific evidence that they are “allergic” or hypersensitive to WiFi, cellular signals, or other electromagnetic signal transmissions, or just the sort of folks who worry about anything new and different simply because it is new and different. Of course they’d never even notice Project Loon’s transmissions if they didn’t know about them by other means, but now that they do, naturally they’ll make with the complaints.

Expect even more complaints if Aereo founder Chet Kanojia’s broadband plan comes off , because his Starry startup plans to use very visible (and some say very ugly) outdoor antennas to provide high-speed Internet over much shorter distances than Project Loon. Starry will be using the 38 Gigahertz band, which a startup called WinStar tried out in 1999. WinStar ended up filing for bankruptcy in 2001, and was liquidated in 2002, but Kanojia hopes he can succeed where WinStar failed. The outdoor antennas are necessary because transmissions on this frequency are line-of-sight only and can be blocked by things like building walls or even trees. They’re also fairly short-range (some commenters on a TechCrunch story say as short as a kilometer or less).

Another start-up using the same frequency, Webpass, started in San Francisco in 2003 and has managed to be more successful than WinStar over the years with service areas in just a few major cities. Interestingly enough, one of them is Boston, which is where Kanojia’s Starry also plans to launch. Starry plans to offer 1Gbps service with no data caps, but has not announced the prices for its plans; Webpass’s service ranges from 10 Mbps to 1 gbps, and from $125 per month to $5,500 per month depending on speed and data transfer limits. (The more expensive plans are used by businesses)

Starry will probably get around the range issue the same way Webpass does, by setting up a mesh network of transceivers so Internet signal can hop from one to the other throughout its service area. However, if Starry works the same way Webpass does, it could experience slowdowns at peak hours. There’s only a limited amount of bandwidth to go around across the entire network, and the more your neighbors use the less will be left over for you.

Internet service isn’t the only new thing Starry has to offer—it’s currently selling a $350 Android-powered touchscreen WiFi router called the Starry Station that promises to solve a few common annoyances with ordinary (and cheaper) routers. The Starry Station notices when you approach and automatically pops up stats on its screen about your network, for example, and Starry claims it can help you notice and resolve problems with wireless connectivity to one or more of your devices. It may be nice, but it seems like $350 is a little too much to pay for such a thing. Perhaps the price will come down over time.

By comparison, Project Loon doesn’t plan to try anything quite so fancy. Its balloon Internet works on the same time-honored 4G LTE technology as modern cellphone carriers, and in fact Google plans to work with local carriers over the course of its testing in all 50 states. Don’t expect any super-duper ultra-fast Internet technology to come out of this. But on the other hand, LTE is the same form of wireless broadband that Karma uses, and we’ve already seen how fast its routers can be. Perhaps if Google’s tests are successful and it gets permission to go ahead with a full rollout, this could lead to a decrease in the price of LTE service. (What if Karma were able to hook onto Google’s balloons and switch to a bigger cap or even no cap at all on its service?) At the very least, it could mean no more cellular dead zones in rural areas as long as there’s a balloon overhead.

As David wrote back in November, easier access to broadband has a lot of great potential for increasing access to information and education—and being able to download e-books is only the beginning. America lags behind a lot of other places, particularly Europe, in terms of affordable national access to broadband Internet, but that’s in large part because America is just so darned big that it’s harder to lay wires out to everywhere—there’s a lot of area to cover. With Starry’s shorter range, it probably won’t help much with that problem, but Project Loon will be cheaper and more easily renewed than satellite, and has the potential to do just as much for our developed USA as for undeveloped areas like Africa.