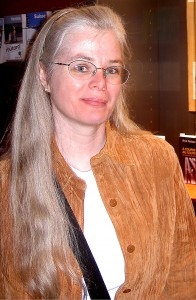 Sarah Hoyt has a post today discussing a sudden reappearance of her Bantam works in bookstores after the rights to them reverted to her, under a contract clause allowing them to sell any left-over copies still in their warehouse after reversion. The odd thing is, Hoyt says she’d been told years before that SF publishers apart from Baen were all moving to print-on-demand to produce copies as needed when needed, so there shouldn’t have been warehouse copies.

It’s an interesting story, but it puzzles me a bit. I certainly hadn’t heard about any publishers moving exclusively to POD, and you’d think it would have come out by now. That being said, I’m certainly willing to give her story the benefit of the doubt. I can certainly believe publishers can misbehave, either intentionally or unintentionally.

A different tale of publisher woe comes from Kristine Kathryn Rusch (pictured above), who discusses author Steve Hamilton’s last-minute decision to pull his latest novel, The Second Life of Nick Mason, from St. Martins Press and offer it for sale to other publishers. Hamilton felt he had not gotten the level of support he was promised from his publisher, and so he not only pulled the book but he also canceled his 4-book contract and returned the moneys he had been paid for it.

Hamilton had been with St. Martins for 17 years. Now he’s with G.P. Putnam’s Sons, a Penguin division who scooped up the book for significantly more than the near-seven figures St. Martins had offered.

Rusch notes that if Hamilton had done this ten years ago, it would likely have meant the end of his career (at least unless he adopted a pseudonym and shopped it through an agent). But times have changed. Hamilton has a canny agent, and publishers are no longer playing by the old rules. And, of course, even if another publisher hadn’t wanted the book, Hamilton could simply have self-published it and probably done very well for himself.

Taking these tales at face value, are they anything new? Probably not. Publishing is a big business like any other. There is dishonesty and misunderstanding. But until recently, they were also effectively the only game in town. But now other publishers are more willing to step in, and everyone has the safety net of being able to self-publish if they have to. Someone like Sarah Hoyt, who has several recent bestsellers to her credit, or Steve Hamilton, who has won two Edgar Awards and has built an audience, would probably have an advantage there. They probably wouldn’t be one of Mike Shatzkin’s “big dogs,” but they probably wouldn’t do too badly for themselves either.