Gizmodo reports on a temporary art installation in New York City that blocked off Water Street for a few hours with…a street-covering expanse of books with LED flashlights on top.

we want literature to seize the streets and become the conqueror of public spaces, freely offering to those who walk by a space free of traffic which for a few hours of the night will succumb to the modest power of the written word.

So to promote reading and literacy, you…put books where they can be walked on or driven over? What next, promoting patriotism by burning a flag?

In an update to yesterday’s Quick Note about the Joo Joo shipping delay, Gizmodo reports that the device’s shipping has been delayed until March 25th by a manufacturing problem. This means, among other things, that  the Joo Joo is going to be launching at the same time as the iPad. Not really the best time to introduce a competing tablet, but then Fusion Garage hasn’t exactly had the best of luck so far anyway.

Mediaweek reports that another Condé Nast magazine (besides Wired, which we already covered) is preparing for an iPad launch. This one is the popular women’s magazine Glamour—and The New Yorker is said not to be far behind. Whether they will be using the same Adobe AIR platform as Wired’s tablet app is not clear.

Engadget reports that Qisda (nee BenQ) has submitted a Linux-based, wifi-equipped, e-ink-screened e-book device for FCC approval. Not sure what else there is to say about that. Yet another e-ink reader, with support for the usual formats, plus wi-fi? Nice, but it just means one more brand that might be shaken out of the market in months to come.

TheBookseller.com has a story about artist Jonathan Howard planning to release a multimedia appbook children’s e-book, because he feels “publishers are failing to exploit the strengths of digital platforms.” The app will feature full-page illustrations and music, have an 8-minute total run time, and sell for 99p (about US$1.51). 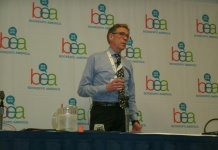