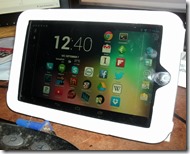 A few days ago, Woot had a $90 special on refurbished 8 GB 7” Nook HD tablets. Since I accidentally cracked my Zeepad screen a few weeks ago and felt the need for a handy little 7” Android tablet, I figured why not. I ordered a case and screen protectors (from Amazon Prime!) and the whole thing arrived today.

Installing the screen protectors turned out to be an exercise in frustration. I went through both of them, and still managed to get specks of dust trapped under the protector. ARGH! The case I ordered was white, as I was expecting to get one of the white Nooks…but I ended up with the “smoke” grey version instead. Oh well. I ordered more screen protectors and will try again when they arrive.

I booted up the Nook, logged in, and played around with it for a while. The basic Nook operating system is a customized version of Android 4.0, and it works surprisingly well for what it is—especially since it has the Google Play Store now available. I was able to download and install most of my apps, though some of them were not compatible—most notably Yelp, FourSquare, the Swype keyboard, and the game Ingress, to which a friend recently invited me.

There were a few minor annoyances with the interface, things that did not work the same way as they had in previous Android tablets I had used. Instead of the standard Android launcher, the Nook uses a sort of “most recent five apps” thing, with buttons below to go to the overall apps list, web, email, and so on. Pressing the hardware button went to the five-most-recent screen, so I would have to tap an extra time to go to the list of overall apps.

The apps that would load worked basically the same as they did on my other Android tablet, and I was able to use them satisfactorily. (This includes the Aldiko and Kindle reader apps—I didn’t test launch them, but I was able to install them just fine.) If that was all I wanted to do, I could probably have gotten by with keeping the Nook HD as it was.

But the dealbreaker was that the Nook HD will not allow installing third-party applications outside of its own or Google’s stores, and there is no way to enable that to happen. This means that I couldn’t follow Juli’s excellent instructions on how to view Amazon videos on an Android tablet, nor could I install any of the Humble Indie Bundle Android games I had bought. (I could install the Humble Bundle installer app, which is in the Play Store, but when I tried to use it to download a game, the Nook wasn’t having any.) Walled gardens, pfui.

Fortunately, the Nook HD is eminently rootable thanks to CyanogenMod, and I wasn’t exactly attached enough to the B&N ecosystem to want to keep it. I found an excellent tutorial walkthrough that guided me. The whole process was practically pain-free, if a little complicated. I had to format a 4 GB micro SD card, write a boot image to it, copy over some zip files, plug it into the Nook, and reboot. I was then able to back up the ROM as it was (just in case), then wipe and flash it with the appropriate CyanogenMod files. I followed the instructions to stick with the stable version 10.1 (which just had a Release Candidate issued the other day—use that, not the nightlies), which got me Android 4.2.2, instead of going with “bleeding edge” 10.2.

I did have a bit of trouble when I inadvertently installed the wrong version of the Google Play store on my first attempt. (The proper version to use for 10.1 is gapps-jb-20130812-signed.zip. I had downloaded gapps-jb-20130813-signed.zip thinking that a day more recent was better, but that version was for 10.2 and didn’t work right at all.) But after I backtracked and put the right version on, the Nook started up just like a “real” Android tablet.

I was able to install all my apps, including ones that hadn’t worked under the Nook’s default OS: Yelp, FourSquare, the Swype keyboard, Ingress. Weirdly, about the only app I tried that wouldn’t install was the Nook Reader. Apparently this is a known issue, and there are ways around that if I really wanted to bother with it. Maybe I will at some point, but for now I’m not worrying about it. Anything I ever bought from BN (including Fictionwise and eReader) I’ve long since Calibred anyway, so I can read it in Aldiko if I need to.

And I was able to install the Flash APK and try watching an Amazon video. It worked perfectly!

So, first impressions: the Nook HD is a very nice little tablet. It has a 1440 x 900 resolution, midway between 720P and 1080P capable, not bad at all. Its 1.3 GHz dual core processor is not as fast as the latest Google stuff, but more than sufficient when the last Android tablet I had was the asthmatic little ZeePad. Its Bluetooth works just fine with the $30 Amazon Essentials iPad keyboard I bought for use with my iPad. It’s going to be a useful addition to my backpack, I can tell already.

It’s not without its drawbacks, of course. It doesn’t have a front- or rear-facing camera, though I’m not exactly heartbroken over the lack. The iPad that’s been my main tablet for the last few years hasn’t had those things either. More annoying is that it has a proprietary charger connector, instead of a generic micro-USB plug. This means I’m dependent on the charger that came with it, so I’ll have to remember to take it with me when I travel, and I hope it doesn’t get lost or broken.

On the whole, the Nook HD is an eminently reasonable cheap Android tablet, and at $90 for a refurb it beat the socks off the ZeePad or any other budget Chinese offering. And you don’t even have to worry about whether B&N will still be supporting it in a few months if you flash it with plain-vanilla Android. The $90 offer is long gone, of course, but odds are it will pop up again, possibly even cheaper—Nate Hoffelder thought it might end up going as low as $50.