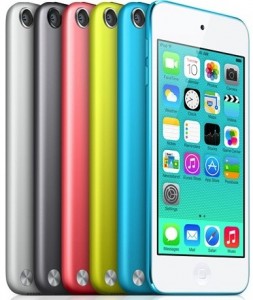 It’s funny how viewpoints change over time. Apple just introduced a new version of the iPod Touch the other day, with a faster CPU and better camera hardware. The price stays about the same, starting at $199 for 16 GB and topping out with a new $399 for 128 GB option. But the screen size remains the same 3.5” it has always been, which leaves David Rothman less than impressed.

This bemuses me, as I remember that back in 2008, in the Kindle’s early days, the same-sized iPhone and iPod Touch were considered a seriously strong contender for e-reading. Steve Pendergrast of Fictionwise held that they even beat out the Kindle as a convenient e-reader. The screen size was small, but it was bright and colorful, and you could do a lot more than just read books on it, after all. (Though, granted, the Kindle was a lot more expensive back then, while the prices of the iPod Touch and iPhone haven’t changed much.) The 4-inch iPhone and iPod Touch were the same size and resolution as the later high-resolution PalmOS PDA devices, the first true birthplace of e-reading—then Retina Display came along and doubled the resolution again.

I long held that the iPod Touch, the iPhone’s phone-free little brother, was a great media mini-tablet choice for people who couldn’t or didn’t want to use a smartphone. I was delighted with mine; Joanna Cabot quite enjoyed hers, too. A lot of people felt they could be “Apple’s secret game-changer.” I got a lot of use out of my first-generation models, up until they got too old for Apple to support their operating system and Android became a more viable alternative as I finally got into smartphones.

An interesting thing about the iPod Touch is that they don’t really seem to have a true Android equivalent. You can find some Android-based mini-tablets, but nothing that rises to the level of fame of the iPod Touch. I suppose it’s simply because there’s just one Apple, so anything they do gets more attention than anything any one Android device manufacturer does.

Regardless, the iPod Touch was long considered a viable alternative device for people who don’t care for or can’t have a smartphone, especially starting a few years back when they began adding things like cameras. And those cameras have gotten better. TechCrunch calls the new model that Apple just introduced “the new point-and-shoot”—as if suddenly you don’t need an iPod Touch or a smartphone; you can have both and just use them for different things. That’s one perspective, I suppose.

From one point of view, that’s really an impressive amount of storage space. 128 GB of digital storage for $399? That’s more space than you see on most smartphones—indeed, it’s bigger than all but the very biggest model of 6th-generation iPod Classic, and those had failure-prone mechanical hard drives rather than flash memory. Just imagine how many e-books you could put on that—not to mention games and movies in addition to music.

And really, are we spoiled by bigger smartphone screens now? I still remember that 3.5” was the perfect size for being able to reach anywhere on the screen with your thumb, something you just can’t do with the bigger screens they have now. And what’s the problem with a small screen for e-reading? You can only read so many words at one time.

But from another perspective, smartphones have gotten more affordable and music streaming services have made it less important to have all that space to store your ripped tunes in your pocket. Since I subscribe to Republic Wireless and Google Play Music, I haven’t thought about carrying my own collection of MP3 files around for quite some time. Maybe that’s the real change that renders the iPod Touch less desirable.