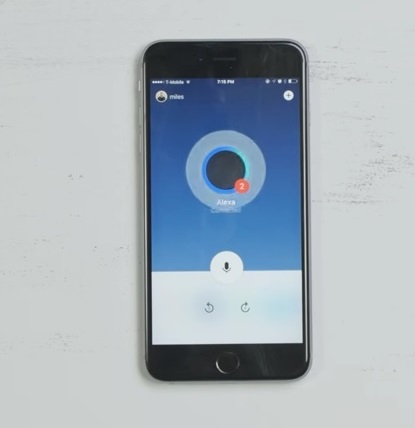 As already reported in TeleRead, third party app vendors are pushing ahead with Amazon Alexa integration for mobile OSs, to let users access Amazon’s wildly popular voice assistant technology for uses like audiobooks on the go, without the $179.99 price tag of an Amazon Echo speaker. First it was Lexi for the iPhone: now it’s Roger, just released for both iOS and Android. As widely reported across the tech press, Roger, originally “launched as a simple walkie-talkie app” by former Spotify engineers with funding from former Facebook executives, “now lets users interact with other services using voice, including Amazon Alexa, Dropbox, and Slack.”

The app’s writeup on the Google Play Store makes not bones about what most users must see as its core strength: “Talk to Amazon Alexa even without an Echo!” The company’s demo video on YouTube shows Roger doing exactly that, ordering a ride for the user via Alexa. The Roger press release also states that: “Its first-of-its-kind integration with the Alexa Voice Service makes the popular voice assistant available to mobile users for free, even if they do not own an Amazon Echo or other Alexa-enabled devices. Users can check their calendar, control smart home devices, make shopping orders, and use a variety of other Alexa ‘Skills’ by simply talking, anywhere, anytime. Roger even works with Bluetooth in the car.”

Roger, incidentally, is not the only app out there claiming to do Alexa integration on mobile, at least for Android. For instance, the app Alexa Listens also claims to “access Amazon’s Alexa personal voice assistant from your Android device.” But Roger definitely seems to be getting the lion’s share of attention and buy-in. No surprise when you consider the plethora of mobile Alexa usage scenarios that Roger has already hinted at in its release. But does it live up to the hype?

Android users giving their feedback on the Google Play Store report varying experiences with Roger and Alexa. Some give the app five stars in this respect and report a completely smooth Alexa user experience – including the new added benefit of using Alexa away from an Amazon base unit. “Like this feature, talking to Alexa even when away from home,” notes one, and the average review count at the time of writing is 4.1. Another user, however, says: “Definitely not ready for prime time & alexa Basically does not working. When I try and send a command to Alexa I can almost never listen to the response back from Alexa.” And a third says: “Our first use for this app is as a remote for Amazon Echo. The app got Alexa to turn on the lights, but wouldn’t turn them off. Wouldn’t start playing music on command; yelling out loud from another room worked better. Also, could not hear Alexa’s response to commands. Awaiting improvements.”

Clearly, some users may not get a wildly enhanced mobile ebook experience from Alexa with Roger – at least, not yet. In fairness, it’s worth pointing out that most mobile apps go through rapid improvement cycles, and the makers appear to be soliciting feedback from the less happy users to fine-tune the platform. The iOS version is already listed as Version 1.1.4, updated May 12, 2016, only two days after the initial launch. “The developers work really hard to keep the progress coming. The app only keeps getting better,” says one satisfied iOS Roger user.

Also, Roger is free on both Android and iOS, unlike Lexi, which carries a $4.99 price tag, so you stand to lose no more than 11MB of download and storage space if you want to try it out. Given Alexa’s mushrooming popularity, and the huge saving from the cost of a separate Alexa-enabled device, Roger has got to be worth at least a try.