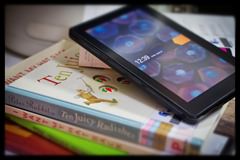 Digitimes is adding fuel to the speculation over new Amazon hardware. The Kitty Kelley of tech reporting revealed this morning that Amazon is working on a new larger tablet.

Citing unnamed sources, Digitimes told us that Amazon is also planning a 12″ tablet. They didn’t say which company was supplying the screen panel, so there’s no way to know whether the screen is an LCD, AMOLED, or some other type of screen tech (Liquavista, he says hopefully?), but the source did mention that Amazon had committed to buying somewhere under 100,000 panels for the device a month.

This rumor comes only days after a new FCC filing suggested that Amazon has a Fire tablet in the pipeline. The paperwork did not reveal the screen size, but it did tell us that the tablet would have Wifi, Bluetooth, and a microSD card slot.  That card slot is an unusual step for Amazon, and it lends weight to the Digitimes rumor today.

Amazon could be committing to making as many as a million 12″ tablets a year. With an estimated 44.7 million tablets shipped in the second quarter, that million units doesn’t sound like much, but this would be an expensive niche tablet not made by Apple. In that light, shipping a million tablets would be an impressive accomplishment.

Do you think this rumor is real?