They say the pen is mightier than the sword, but someone’s now designed a device that might be mightier than the ordinary pen. Called “Scribble,” this is a pen that has five refillable ink cartridges in black, white, cyan, yellow, and magenta, just like an inkjet printer—and at the back, there’s a scanner. Press the scanner against any object, and the pen will mix its inks to match that object’s color.

The pen can also connect to a computer or other device via micro-USB or Bluetooth for using the color in graphical applications, and a stylus version with just the scanner part will be available, too. It can detect up to sixteen million colors, and can store 100,000 of them in its onboard memory. Estimated retail will be $150 for the pen, or $80 for the stylus, and the team is preparing a Kickstarter campaign. 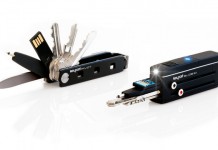