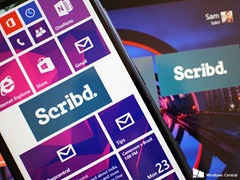 Scribd has just announced it is making another change to its “unlimited subscription” business model beginning next month. It’s going to be moving from a fully-unlimited model to a hybrid limited/unlimited model. CEO Trip Adler explains that the company is paring down its selection of titles that are available for fully-unlimited reading, and changing them out on a rotating basis. It will be augmenting this with a choice of three books and one audiobook per month from the entire Scribd library.

Update: According to Scribd’s support pages, these “monthly reads” will remain yours for as long as you subscribe to Scribd, and will roll over if not used until you accumulate 9 e-book and 3 audiobook selections. (Hat tip to Nate Hoffelder for letting me know.)

I had the chance to speak to CEO Trip Adler on the phone while preparing this story, and asked him some questions about the new service plan. Adler said that they still hadn’t finalized the exact number of rotating “unlimited” selection titles at this point, but that it would number into the thousands of titles, out of a little over a million titles available overall. The length of their availability would vary by the individual publisher; some might rotate out monthly and others quarterly.

If you’ve been following Scribd’s subscription service, you’ll note that it has made a number of changes over the last year or so—paring down the number of romance and erotica titles available in its catalog by as much as 80 to 90%, and also cutting back the number of audiobooks available. It seemed that readers were simply consuming too darned many of them. And, indeed, there seems to be a similar rationale for this new change. Adler even comes right out and says, “These changes will only affect the experience of a small group of subscribers – 3% in any given month – who were reading many times their monthly membership fee.”

It seems that Scribd is running into the same “big eaters at the buffet” problem that plagued 4G wireless service Karma in its swiftly-aborted attempt at an “unlimited” bandwidth service, the so-called “Neverstop”. But exactly what comprises a “big eater” might surprise you. According to CEO Adler, the numbers are a lot lower than I had expected. Adler explained that only 3% of Scribd’s users actually read more than 3 books per month. Those 3% could read into the tens of books per month, or even a hundred or more, but everyone else read 3 or fewer.

Thus, making 3 books available per month from Scribd’s entire catalog would effectively continue giving 97% of customers the same access they had been enjoying—or, indeed, wider access than they’d been enjoying, since this should include titles that were formerly only available for separate purchase. Meanwhile, that 3% would still have access to a changing selection of titles to keep reading on an unlimited basis. The new change also means that Scribd can bring back some titles it had previously dropped from the catalog, Adler explained, such as many Harlequin Romance titles. Though I didn’t ask Adler about this, I imagine that even if every single one of that 3% canceled their subscription service over this, they would still come out ahead.

Alternate e-book revenue streams such as general subscription services or e-book clubs seem to be especially problematic in regard to publisher compensation, what with Oyster and Entitle both announcing they were shutting down their services last year, and Librify selling out to Scribd. Smashwords CEO Mark Coker lays the problem squarely at Amazon’s feet, saying that “Amazon can pick the pockets of authors and give the savings to readers”.

Mike Shatzkin writes that Oyster’s business model for books from major publishers had them “paying full price for each use of a book with a threshold trigger at considerably less than a complete read while, at the same time, offering consumers a monthly subscription price that barely covered the sale of one book, let alone two,” while they hoped they could build up big enough audiences that they would have enough heft to renegotiate better terms.

Meanwhile, Amazon had that big an audience, and hence that much heft, almost from the very beginning, and was able to start the race at a considerable advantage for its own “Kindle Unlimited” service. But as Nate Hoffelder reports on The Digital Reader, Amazon itself is changing up the way it pays for its own unlimited subscription reads, even as its number of subscribers is hitting record highs.

According to a Scribd spokesperson, Scribd’s own licensing terms vary by publisher, ranging from Shatzkin’s pay-per-read to pool licensing terms. Given that these terms are confidential, it’s impossible to venture a guess how many Scribd titles are of each type, but if very many of them were pay-per-read and many of those 3% were especially voracious with regard to them, the fees could have piled up very quickly.

It remains to be seen whether Scribd’s revised semi-unlimited model will be sufficient to plug the leak and let it stay afloat a while longer—and just how angry its subscribers will be that the service is becoming something other than what it said it was at the outset. (Karma’s own users were so uniformly irate at the changes to the Neverstop plan that the company finally removed the comment section altogether from its blog entry detailing the change.) But if Adler is right, and the vast majority of its readers read fewer than 3 titles per month, it is hard to imagine that too many could be that upset at the change. Still, I suppose it’s possible some readers might be upset because they might have wanted to read more than 3 books per month at some point.

It remains to be seen whether Scribd will be better-able to compete with Amazon at this new price point. But if most readers really do read so few titles per month, then imposing these limitations in the name of providing three titles from across their entire selection could be an improvement for them—especially if those titles could include ones that were formerly only available for separate purchase under the old plan.