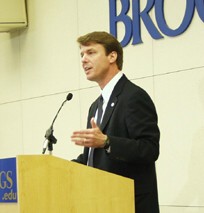 My mother-in-law the retired textile worker grimaced this week in her livingroom in Statesville, North Carolina, as she watched Democratic Sen. John Edwards utter the standard Man of The People lines in discussing his candidacy for President of the United States. “He’s just like the rest of ’em,” she said. “He’s saying the right things now, but just wait until he gets elected.” Himself the son of a textile worker and postal employee, Edwards ended up at the University of North Carolina Law School and made millions as a trial lawyer.

So, as President, how would the Senator stand on copyright law and libraries? Would he appreciate the need for balanced copyright law–a “must” if libraries are to survive and thrive on the Net? A story in the July 19 Raleigh News and Observer suggests that the Senator as of this past summer had a keen interest in staying in the good graces of the entertainment industry. He starred in a fund-raiser in New York–attended by such luminaries as Hilary Rosen, chairwoman of the Recording Industry Association of America and perhaps the most gung ho of the copyright zealots. Let’s hope that won’t prevent Edwards from showing more enlightenment in the future and seeking the end of the anti-library Sonny Bono Copyright Extension Act–if the Supreme Court fails to overturn it and this legislative atrocity is still around with Edwards in the White House. Especially when books finally do go electronic in a major way, the Act will cause libraries in North Carolina to spends millions of extra dollars over the years. Thanks to the Act, books will need a long time more to enter the public domain, jacking up costs for libraries and schools alike.

No premature judgments of Edwards, however. Elsewhere in Carolina, in Robbins, where Edwards grew up and where fewer than ten percent of the people held four-year college degrees as of 1990, citizens have expressed a strong interest in their little library. Perhaps someone in Robbins can successfully send Edwards a reminder of all the good he could do in the copyright area and in other ways. Gasp, what if he worked toward a TeleRead-type national digital library system, which could multiply, by many times, the number of modern books online for the good people of Statesville and Robbins and still provide for fair payment of copyright holders? Imagine what a godsend TeleRead could be to a beaten-up mill town like Robbins, which, by the way, now faces yet another educational challenge–the highest percentage of Hispanics in any town in North Carolina, an amazing 48 percent. How to help them feel comfortable in a new land with a new language? If well coordnated with local schools and libraries, a well stocked national digital collection could help speed up the assimilation process in Robbins and the rest of Moore County.

Hey, Senator–it’s time to prove that you’re uncommon enough in Washington to care about commoners. For a good, sound perspective on copyright law as it affects schools and libraries, you might want to check in with Laura Gasaway, the UNC law librarian–one of the leading experts in this area. And don’t forget to contact someone else in Chapel Hill, Gregory Newby, an information-science specialist who helps run Project Gutenberg, the oldest publisher of public domain books on the Net.

Meanwhile here’s a friendly little tip from a disgusted lifelong Democrat: I’ll feel better about my party when TV networks stop inviting Hilary Rosen on as a guest political commentor to find out what the Democrats are up to. Mercifully TeleRead is an independent nonpartisan project out of reach of Rosen and Republican equivalents. Oh, and Senator, don’t confuse TeleRead with pirates–we’re pro-copyright and simply want to use technology to restore the balance that the Founding Fathers had in mind, the best way to preserve the concept for the wired generation.

Grubby copyright issues vs. 'the love child': TeleBlog was on John Edwards' case for years—on matters that counted