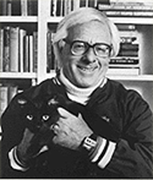 As anyone who reads news or social media on the web may have noticed, Ray Bradbury has passed away at the age of 91. Bradbury was a truly great writer, and a great visionary, though I tended not to enjoy his work as much as other writers—too much of it had downer themes and endings. But then a lot of SF always has.

Bradbury was probably best remembered among the literary set for his novel Fahrenheit 451, which has long been regarded as a cautionary tale against censorship though Bradbury himself said (much later in life than when he wrote it) it was intended as a protest against TV and other newer media stealing people away from books and ideas. It’s not too surprising Bradbury hated e-books, declining a 2007 request by Yahoo to post one of his books as an e-book, though he finally had to give in and permit electronic editions of his works last November in order to get new contracts.

On PaidContent, Mathew Ingram writes thoughtfully about what Bradbury “would have thought” of today’s digital world. (What do you mean, Matthew? I think he made his feelings on it pretty clear—up until today, he was living in it along with the rest of us.) He ponders whether we are living in the kind of world Bradbury feared when he wrote Fahrenheit 451.

Whereas we do have many mind-numbing distractions available (including video games, the urge to play more of which I am manfully fighting as I write these posts), distracting us from reading and writing like never before, we do have some countervailing positive influences of which Bradbury could never have dreamed. We can express ourselves to others in more ways than ever before, both in the trivial such as Facebook and Twitter, and in the more in-depth, such as blogging or even self-publishing.

I even video game regularly with people from Germany, Russia, or Australia, chatting with them on voice and savoring their foreign accents. Ten or twenty years ago, I’d never have had any way to meet them, and talking with them would have cost dollars per minute. And on a more serious level, consider the Arab Spring. Rather than merely serving as tools for tyranny, many of the new technologies are serving as tools for fighting it.

It’s a bit ironic that one of science fiction’s best-known writers couldn’t appreciate the rise of science-fictional gadgetry. I hope when I get that old that I’m still able to look at modern technology and media with a more open mind than Bradbury seemed to have in the last few years. As to whether or not I actually will…well, at least I can hope. That being said, it’s still undeniable that Bradbury’s writing helped shape our current ways of thinking and living. He will be missed.