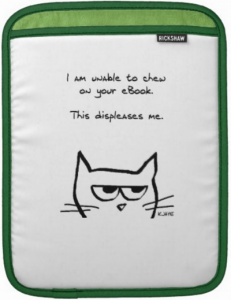 The first time I watched cable television after cutting the cord myself, I felt so impatient with it. The delays—first by adherence to scheduled broadcast times, then during the show via commercials—seemed interminable to me. And now I have found the book equivalent. I tried to share a book with one of those smell-of-paper people who shuns e-books.

We celebrated Passover during the weekend, and my younger sister was part of the festivities. At one point, she owned a Kindle. However, she does not any longer. She is one of those ‘smell of paper’ people who prefers a ‘real’ book (and I have read a few studies such as this one which suggest that she is not alone amongst her demographic in this particular format preference).

I was doing some decluttering and had offered her several books I was getting rid of. Several she rejected because they didn’t have pictures (these were cookbooks; pictures are a must for her). Her favourite finds amongst my offerings were several thick, glossy hardcovers from the lifestyle and decorating category. Several of these books were based on content from popular blogs.

During our subsequent dinner conversation, I mentioned two non-fiction books I’d read that were exactly what she was looking for. ‘Oh, but you probably only have them in e-book,’ she complained. ‘So I can’t really borrow them.’ Nor could I send her a link or an excerpt or anything. If she were an e-book user too, this would be so easy. E-mail the link, and by the end of the evening, she would be reading it already. We could be discussing the books within a few days.

Instead, I got a text from her the next day: “I ordered that book you suggested! Just waiting for Amazon to send me the shipping info. So excited!” And so I sighed and felt those same feelings I’d felt when I had to sit through TV commercials just to watch a show. She is eager to discuss this book with me. But not only do I have to wait for her to read it, I have to wait even longer because Amazon has to mail her some paper first. It just seems so…unnecessary. Sigh.

Image credit and more details: Here. Zazzle sells the “Angry Cat Hates eBooks Sleeve For iPads” for $51.40—clever but no bargain compared to a $30 Kindle Fire and other e-book-capable devices mentioned by TeleRead Editor Chris Meadows.