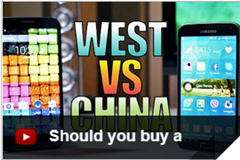 A Chinese novelist, Cixin Liu, is a just-announced Hugo winner.

Get set for more of the same in the book world (as I note in the accompanying TeleRead post).

Now, what about an e-book-related area where the Chinese already figure prominently—cell phones? Clearly, phones are among the main ways people on Planet Earth enjoy e-books, perhaps even Way #1. Their use has grown sharply in the U.S.

In a well-done YouTube, a British user named Mrwhosetheboss explores a question that will count more and more, in the States and elsewhere. Should you buy a Chinese phone or a global brand name? Actually the distinctions are blurring. I myself am the happy owner of a Huawei Ascend Mate 2, and even if the company isn’t Apple, many would consider it a major brand. Huawei, in fact, is said to be the world’s largest maker of telecommunications equipment of various kinds.

That said, my Ascend Mate is still stuck at Android Version 4.3—I’ve just checked to see if an update is available. This failure to update is a common problem among Chinese phones, according to Mrwhosetheboss, and I agree.

Another negative is the possibility of malware. If I were in the military in the U.S. or elsewhere and worked with highly classified information, I would not own a Huawei, at least not without its undergoing a good inspection by security experts. AVG Mobile cannot delete a dodgy program Huawei installed. And who knows what work-related topics may accidentally show up on even a personal phone? Not to mention potential blackmail issues.

In favor of the Chinese would be, yes, the pricing. I paid less than $300 last year for a solidly built phone with a 6.1-inch display, a hefty 3900 mAh battery, rated talk time of 28 hours, claimed stand-by time of 621 hours, 4G LTE and compatibility with a wide range of GSM carriers. Current price on Amazon is $245 (TeleRead buying link). The display of 720 x 1280 pixels gives me 241 pixels per inch, compared to the 400 ppi of many top phones, but for the price and other pluses, the tradeoff is worth it. Besides, the 241 far exceeds the 212 ppi of the older Kindle Paperwhites.

In features and quality, the Chinese are clearly catching up, especially in the econo range, as illustrated by recent offerings from Xiaomi.

No, I’m not saying Chinese phones are for everyone. They don’t offer the simplified interface of iOS, or the many iOnly apps. That’s not all. Many and perhaps most Chinese Android phones lack the same level of bloatware present in phones bundled by major telecommunications carriers in the U.S.; but some come with nondeletable apps for Chinese app stores. Also, they may still may plague users with clumsy interfaces in dire need of replacements such as Nova Launcher’s.

Let’s hope, of course, that Google’s slim-down efforts will improve phones from vendors everywhere—even if new threats may arise in the form of notification-based ads.

Related: The best phone you can’t bet in America, a Wall Street Journal review of an Xiaomi phone.