Jack Shafer, the Reuters columnist, wrote last year that Graham family should spin off the Washington Post newspaper from the company of the same name. As the buyer he suggested Michael Bloomberg. “Not so crazy an idea,” I said on the Solomon Scandals site and in the Georgetown Dish.

Now the spin-off will become a reality, except that the billionaire is instead Jeff Bezos, CEO of Amazon (photo), who is buying the Post personally rather than for his company. The Grahams will keep some publications. But not the flagship paper itself. The price of $250 million might have seemed shockingly low once, but not today, when the Post isn’t the sure-fire ATM machine it was in past years. The Boston Globe similarly was a fire-sale deal. 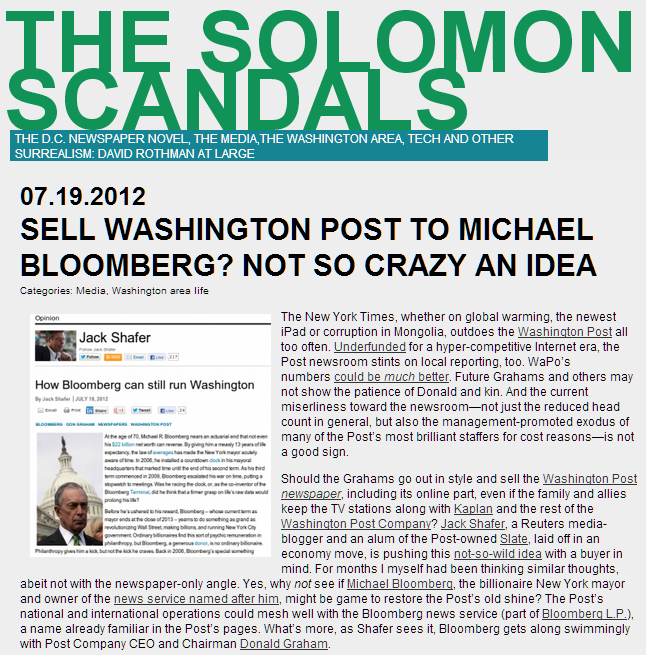 The Grahams were smart to sell the Post to someone with greater resources, many millions of which I hope will go to shore up the paper’s editorial side and among other things pay for true hyperlocal offerings for readers wanting them. Bezos’s long-term approach to business could make the Post a more serious threat to the New York Times in general and, on political matters, to Politico.

• First, how much time will Bezos give Post publisher Katharine Weymouth and the rest of the paper’s current management to turn the Post around? Even the most patient of investors, including the sugar-daddy for a 10,000-year clock, will go only so far.

• Second, what does the sale mean in terms of the Post’s access to better technical resources? In site design and loading speed, as well as in the less than stellar usefulness of the Post’s Apple and Android apps, the paper disappoints me. Thinking in a related vein, I’m curious if, with encouragement from Bezos, we’ll see synergies between the newspaper and e-books through hyperlinking and otherwise. The Post is already producing staff-written e-books. As asked on one publishing-related email list, “what does this mean re news, paywalls, newsfeeds and the growing one stop media and information platform?” Oh, and just when will the Post shed its paper edition?

• Third, even though Jeff Bezos will let others manage the Post, what will be the ultimate outcome in terms of editorial page policy on various matters, including Amazon’s business interests in regard to antitrust and other issues? He appears to be a moderate with some libertarian tendencies. As a library booster, I am curious how he would stand on the issue of well-stocked national digital libraries and a national library endowment (the latter idea is discussed here and here).

Whatever the case, I find Bezos a far, far more desirable buyer in general compared to, say, Gannett or a right-wing crazy, and if nothing else, he almost surely shows more respect for civil liberties than Michael Bloomberg does—no small detail in this era of NSA snooping. For now, the best of luck to the sellers and the buyer.

This post originally appeared on David Rothman’s SolomonScandals.com, a website devoted to Rothman’s novel of the same name.