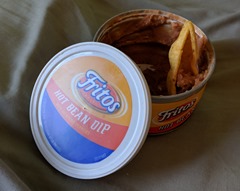 We’re used to Amazon usually having the lowest prices on things, or at least—since the advent of agency pricing on e-books—the same price as everywhere else. But there are times when that simply isn’t so.

Forbes has noticed something I already knew for a while, and I’ll bet many of you did, too. If you’re in the habit of searching Amazon for things you can’t get in your area, especially grocery items, sometimes you’ll come across ridiculously-overpriced listings from third-party sellers. Forbes uses the example of a six-pack of chocolate-flavored Ensure that cost $7.99 at Target but $16 to $19 (depending on the day) on Amazon, or a 36-ounce bottle of Tazo iced passion herbal tea that cost $3.29 at Target but $18 to $37 on Amazon.

I’ve run across my own example—a favorite snack from back when I lived in Missouri: Fritos-brand hot bean dip with jalapeno peppers. You can’t get that stuff in Indiana—according to the manager of a grocery store I asked about it, the regional grocery distributor doesn’t stock it. When I was in St. Louis to visit family a few months ago, I stocked up on a dozen cans of the stuff at about two bucks each, and I’ve nearly run out now. (I may grab some more when I head back down to Missouri for my parents’ 50th wedding anniversary next month. My parents point out I’d save even more money by making it myself, but I don’t really have the necessary equipment or desire to put in the effort.)

But just look what you’d pay for it on Amazon! The only option that’s even remotely economical is to buy 24 cans for $98.68—and even then, that’s four bucks a can. If you want just one can, you’ll pay twelve bucks for it—or even seventeen! By comparison, if you order it via walmart.com, you’ll just pay $2.62 a can with no minimum order, and can have it shipped to your local store to pick up.

A pricing study by Boomerang Commerce tallies up a number of such grocery items that seem outrageously overpriced on Amazon compared to Target and Wal-Mart. The overpriced items invariably come from third-party sellers listing them under the auspice of retail arbitrage. It’s not so hard to understand when you think about it. If I lived in Missouri and could get three cans of bean dip for less than nine bucks, but I knew there were people in other states who couldn’t get it so easily but wanted it, it’s a no-brainer to buy those cans at regular price then jack it up on Amazon to take advantage of people with a craving who didn’t have any easier way of getting it.

They might not sell very quickly, but what a profit margin when they do! (It’s like the old joke about the man selling watermelons for a million dollars each who only needs to sell one.) You might not even have to buy the cans yourself until they sell—or you could even have the other retailer ship them directly once someone orders them via you.

By the same token, sometimes a local retailer runs a really good sale and you find it worth your while to stock up and sell elsewhere at the list price. When I worked at K-Mart, about fifteen years ago, when we ran really good sales on canned soft drinks we would occasionally see local soft drink machine operators come through with several carts loaded up with boxes, because we were selling it for less than their own wholesale distributor.

That kind of thing is just what you get when you set up a marketplace where nearly anyone can sell nearly anything at any price—people who can buy something cheap do so, then list it at higher prices for the benefit of other people who can’t buy it that cheap. (That’s also what those scanner-toting used-book resellers who turn a tidy profit on used paper books on Amazon do.) So, caveat emptor. Know what you’re willing to pay and don’t pay any more than that. But then, there are people out there who are willing to pay these high prices, or else the sellers would lower them. So, when you get right down to it, that’s just how the free market works.

That said, grocery goods aren’t the only place where Amazon can prove less than a bargain. Remember when Amazon decided to drop Google’s Chromecast from its store last year, in the name of lessening customer confusion from it “not interact[ing] well with Prime Video”? The interesting thing is, if you go to Amazon.com and search on “Chromecast” now, in the midst of all the listings of Fire TV and Roku products and books about the Chromecast, you’ll find a number of Chromecast knockoffs with names like “EZCast” or “AnyCast”, that ape the distinctive body design of the first-generation Chromecast. Rife with one-star reviews and costing about half as much as the genuine article, they’re clearly no bargain. You would think that if Amazon were really serious about avoiding customer confusion, it wouldn’t allow these cheap knockoff products on its store either!